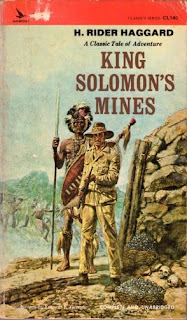 King Solomon’s Mines, published in 1885, made H. Rider Haggard one of the most popular of late Victorian and Edwardian novelists. It’s a classic tale of adventure set in southern Africa, involving the search for the fabled diamond mines of King Solomon, and also the fate of the African kingdom of the Kukuanes. Haggard is often accused of being a typical apologist for imperialism, and also of being a misogynist. The reality, as is so often the case with the Victorians, is more complicated. There are Africans in the book who are portrayed as cruel and vicious, but most of the Africans are portrayed as being brave, intelligent and honourable. There is not a single African character who is stupid or cowardly.

The narrator of the adventure is Allan Quatermain, an elephant hunter and adventurer. Quatermain’s attitudes towards the Africans are contradictory. He displays some definite racist attitudes, but it is clear that personal experiences in Africa have contradicted his racist assumptions, and he has never really resolved his own conflicting views. Haggard himself spent some considerable time in Africa, and it’s likely that his own attitudes were as inconsistent as Quatermain’s.

In both this novel and in his other huge bestseller She Haggard’s attitudes towards women show the same contradictions. Quatermain’s feelings about the attraction between the English naval officer and the African girl Foulata display these contradictions very clearly – on the one hand Quatermain regards Foulata as one of the noblest women he’s known, on the other hand he’s says it’s just as well that a relationship between her and the Englishman will be impossible, because no good can come of it Of course he’s right; late 19th century society would be unlikely to accept such a union. Whether this is a bad thing or not is something Quatermain seems unsure of.

The story itself includes many elements that became clichés of the adventure genre, and you have to remind yourself that Haggard actually invented many of these clichés. There are plenty of narrow escapes for our band of adventurers, there are some genuinely very creepy moments, and plenty of entertainment. One thing I found very interesting was the character of Quatermain himself - he isn’t really a typical Victorian Boys’ Own adventure hero. He often describes himself as cowardly, and he only does brave things when he finds that running away isn’t an option. And his motivation for taking part in the adventure is financial gain, and whenever forgets that that is his main purpose. He has a lot more human weaknesses, and even moral failings, than you expect in this type of book. In some ways he’s more like George Macdonald Fraser’s notorious Harry Flashman than a classic Victorian hero.

While King Solomon’s Mines is great fun, it’s not quite as good as She.
Posted by dfordoom at 4:44 AM