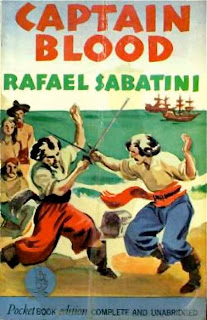 Rafael Sabatini was arguably the last of the writers of old-fashioned swashbuckling adventure romances in the tradition of The Three Musketeers.

Captain Blood tells the story of Peter Blood. Blood is a doctor who is caught up in the events surrounding Monmouth’s rebellion against King James II in 1685 when he tends the wounds of one of the rebels. He soon finds himself clapped in irons and shortly thereafter shipped to the West Indies and sold into slavery. But of course the story doesn’t end there and Blood ends up a reluctant pirate.

This is a classic story of a man condemned for a crime he did not commit. What makes the story interesting is that although Blood embraces piracy, at the same time he is still trying to live up to his own high moral standards. In fact, the same high moral standards that got him into trouble in the first place.

Sabatini was an immensely popular author but is now all but forgotten. Captain Blood is wonderful entertainment. If you have a taste for adventure than it’s an absolute must-read.
Posted by dfordoom at 2:05 AM