The Face in the Abyss by Abraham Merritt 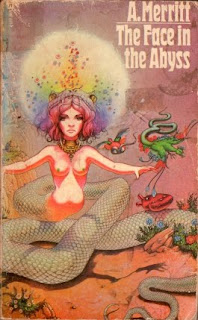 Abraham Merritt is one of the forgotten masters of weird fiction. His work ranges from horror (Burn Witch Burn) to epic fantasy (the delightful The Ship of Ishtar). The Face in the Abyss, published in 1931, could perhaps be described as a blend of dark fantasy and the 19th century tale of adventure in the style of H. Rider Haggard, with a dash of the Conan Doyle of the Professor Challenger stories.

A mining engineer on a prospecting expedition in South America stumbles across a lost civilisation. A culture both more civilised than our own and more barbarous; more advanced and yet in some ways curiously primitive. This lost world also contains forgotten animals, including several varieties of dinosaurs, as well as creatures of almost unimaginable strangeness. Is it magic, or a strange and highly advanced technology, that is responsible for the wonders of this land? Naturally the engineer meets a beautiful young woman, and they fall in love. But his arrival triggers an epic battle between the Snake Mother and her arch-rival, Nimir.
It’s all great fun, packed with action and romance, it moves along at breakneck speed (it takes 224 pages to tell a story for which most modern writers would require at least 800 pages), and the lost world is described vividly but without getting bogged down in unnecessary details. Merritt’s style is always fairly uncomplicated but entertaining. Anything by Merritt is worth reading.
Posted by dfordoom at 12:30 AM