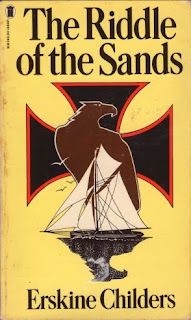 The author, Erskine Childers, was an interesting character in his own right. Although The Riddle of the Sands was very much a stirring story of English patriotism Childers himself was executed by the British during the Irish Civil War in 1922.
Posted by dfordoom at 11:51 PM