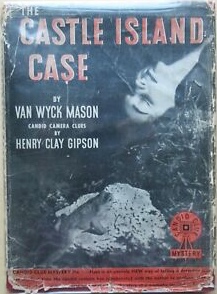 F. Van Wyck Mason’s 1937 mystery The Castle Island Case belongs to a particularly fascinating sub-genre - the mystery novel with visual clues. It therefore has some affinity with some of the “murder dossier” mysteries of the time which included various visual or physical clues.

The Castle Island Case is a mystery that is profusely illustrated with photographs. Some or all of the photographs contain important clues.

Major Roger Allenby flies to Bermuda to conduct an investigation for an insurance company. A young woman named Judy Fortier (whose life was insured with the company) has apparently drowned and the circumstances suggest suicide. She seems to have jumped off a cliff into the sea. The sea was rough on that day, there was a dangerous rip tide and Judy was a poor swimmer. Her body was not found but she could hardly have survived.

The insurance company has no reason to suspect fraud but they are understandably not entirely happy about paying out on the policy in the absence of a body. Two other things concern them - there was no apparent motive for suicide and the young lady’s life was insured for a very large amount of money considering that she was only a secretary.

Judy had been Barney Grafton’s secretary and it had been assumed that he’d marry her, but then he married a wealthy New England socialite instead. Barbara Grafton is still fairly young and definitely glamorous, although tending to be just a little strait-laced. Grafton is planning a huge South American mining deal so Allenby’s cover is that he’s a retired banker looking to get in on a good deal.

Much of the action centres on the palatial home of Barney Grafton (Freebooters’ Hall), located on Plunder Island, an apparently mythical island (Bermuda consists of no less than 181 islands). So we have a typical golden age detective fiction setup with a relatively small group of suspects more or less isolated. In this case they’re not entirely isolated but it’s still safe to assume that the murderer has to be a member of Grafton’s household or one of his house guests. Grafton’s family consists of his wife Barbara, his beautiful daughter Gail and his young stepson Peter. Also present are young scientist Stanley Gibbons (who hopes to marry Gail), Judy Fortier’s sister Patricia, Barbara’s slightly dissolute brother Terry, financier C. Townley Ward and a pretty and bubble southern belle named Cora Sue. 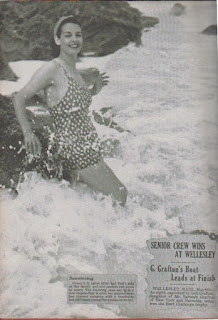 There are plenty of romantic entanglements among these people, providing potential motives for murder. Both the mining deal and the large policy on Judy Fortier’s life provide possible monetary motives. And there are secrets that need to be kept secret so fear could be a motive as well.

Allenby has an impressive reputation as an investigator but he really struggles with this case. He cannot prevent the second murder, nor the third.

Finally he comes up with an ingenious plan to trap the murderer (or murderess). Fittingly, his plan involves photographic trickery. This is a book that doesn’t involve clever murder methods (there’s nothing remotely impossible about any of the crimes) but it does include clever methods of detection. The photographic trick is just one of the tricks up Allenby’s sleeve.

There are also very clever coded messages. And there’s voodoo. As you would expect the crucial clues are almost all visual. There are no unbreakable alibis but Mason (like Allenby) has a few twists to pull on us.

The many many photographs included in the book give it just a bit of a documentary feel, and even a “true crime” feel. Many of the photographs are supposedly snapshots taken by Allenby (who doesn’t go anywhere without his trusty Leica camera). So we get the feeling that we really are seeing what Allenby sees.

We even get a kind of Challenge to the Reader when our attention is drawn to a small number of photographs that contain the really major clues. But of course that doesn’t necessarily mean that we know what to look for. We might know, if we’ve been paying very close attention.

The use of photographs allows Mason to dispense with descriptive passages, Instead of telling us what Freebooters’ Hall look like we got a photo of the house. We don’t need to be told what the characters look like. We can see them in photographs. This means that the text section of the novel is very economical and the story moves along very quickly. 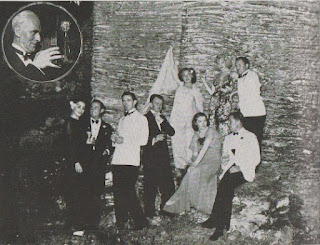 The publishers must have had high hopes for his book since they flew photographer Henry Clay Gipson and a whole gaggle of models to Bermuda for the photo shoot. Interestingly the models included crime writer C. Daly King and F. Van Wyck Mason himself.

One of the surprising things about this book is that one of the photographic clues is a nude photograph of a young woman. And she is entirely nude. Very daring for 1937, but then I guess the publishers figured that the whole point of the book was to attract attention so why not add a bit of nudity? The book is in fact rather on the racy side, with plenty of photos of the female characters in bathing suits and even engaged in some mildly sexual hijinks.

F. Van Wyck Mason was a very popular writer (in many genres) at the time. He was the author of the extremely successful and long-running series of Hugh North spy thrillers. They’re wonderfully entertaining and some of them are in fact closer to being detective novels than spy novels, an example being the excellent The Fort Terror Murders. Equally good are The Branded Spy Murders, The Budapest Parade Murders (which combine both genres) and The Singapore Exile Murders. Mason was a very popular writer (in many other genres as well) at the time.

The Castle Island Case is an interesting experiment that, surprisingly, works pretty well. It doesn’t come across as mere gimmickry. There’s a pretty decent plot and the photos give it a very distinctive feel. It’s definitely worth getting for its historical value as an experiment but it’s a satisfying and very enjoyable mystery as well. Highly recommended.