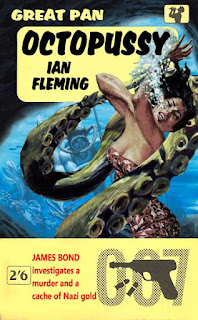 When Ian Fleming died in 1964 he left behind one unfinished Bond novel (The Man with the Golden Gun of which he had only completed the first draft) and a few short stories that had not been collected in book form. The Man with the Golden Gun was published in 1965 and the following year Fleming’s publishers, Jonathan Cape, released Octopussy which contains two of the short stories, Octopussy and The Living Daylights. For the paperback edition another story, Property of a Lady (a story Fleming absolutely hated and was embarrassed by) was added. Much later editions included a fourth story, 007 in New York.

The Living Daylights was originally published in The Sunday Times colour supplement in early 1962. It’s an interesting story because it focuses almost entirely on Bond’s motivations and his feelings about his work. That’s not to say that it’s by any means plotless (and there is a very neat twist at the end) but the events of the plot are used to tell us something about Bond the man.

Bond has been given a new assignment and he’s very unhappy about it. A British spy, code-named 272, is making his escape from East Berlin. Unfortunately the East Germans know all about the escape attempt from a double agent (a double agent that the British discovered too late). 272 will have to cross an area of open ground to reach the border and it is certain that a KGB sniper will be there to kill him as he crosses that open ground. Bond’s job is to kill the KGB sniper first.

Bond has three days to wait in Berlin. He spends those days desperately trying to keep occupied. He visits museums and art galleries. He visits the zoo. He amuses himself by watching (from his assassin’s perch) the young ladies in a women’s orchestra trooping in and out of the Ministry of Culture building just across the border. There’s a very pretty young lady ’cellist who catches his eye. She reminds Bond of the joys of life at a time when he is waiting to kill a man.

Bond decides that if he’s going to do this killing he’s going to have a very large Scotch first. His spotter, Captain Sender, gets all prissy about this and tells Bond he’s going to put him on report for drinking on the job. Bond expresses the hope that he will lose his Double-0 number as a result so he won’t have to do any more killing.

Sender represents a totally different approach to the job compared to Bond. Sender is the kind of man who loves following orders to the letter. Bond dislikes him intensely.

Much has been made of Bond’s sadism but this story shows a different side to his character. He can be ruthless but killing in cold blood really does affect him.

The Living Daylights could easily have been made into an episode of Callan. It has the same atmosphere of disillusionment.

The Property of a Lady

The Property of a Lady was written for Sotheby’s for their house journal and obviously they wanted an auction room story. The story concerns a double agent and a fabulously valuable Fabergé terrestrial globe about to be auctioned at Sotheby’s. In typical Fleming style the jewels being auctioned are described in loving detail.

But this is just a nothing story. It’s easy to see why Fleming considered it to be an abject failure. It’s just a way to pad out the collection. It would have been better to just forget this story which was what Fleming wanted to do.

007 in New York is a very short throwaway story (which was later incorporated into Fleming’s non-fiction book Thrilling Cities). It’s mostly just Bond’s impressions of New York - what he likes and dislikes about the city. There is a very very thin spy plot. Almost non-existent. You get one thing you don’t expect - a whimsical humorous ending. And you get James Bond’s recipe for scrambled eggs. It’s hardly a story at all, just a literary trifle, but it’s moderately diverting.

Fleming wasn’t entirely comfortable with the short story format and it didn’t really suit his talents as a writer. What he did do with some of his short stories was to take a less conventional approach compared to his novels. And that’s the case with Octopussy, written in early 1962. Bond is merely a peripheral character and the story would have worked perfectly well without him. Octopussy is the story of Major Dexter Smythe, described as the wreck of a Secret Service man. 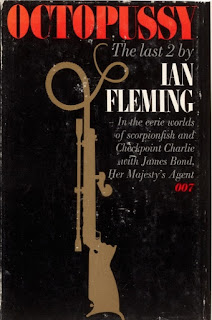 Smythe’s utterly futile existence in Jamaica is divided between drinking too much and communing with his only real friends, the fish that live in the waters near his little estate. His favourite of all the marine creatures is an octopus he is trying to tame. He has christened her Octopussy. He hopes to find out what will happen if he can catch a scorpion fish for her. The scorpion fish is deadly to humans, but possibly not to an octopus.

Then a chap from the Ministry of Defence turns up. His name is Bond. James Bond. Smythe realises immediately that Bond is an MI6 man, and that means the game is up. His secret has been discovered. That’s very bad news but perhaps it doesn’t matter. Smythe has a bad heart and is living on borrowed time anyway (which of course was true of Ian Fleming in 1962).

Most of the story is a flashback to the end of the war, relating to certain events in the mountains of Austria. Those events have now caught up with Major Smythe.

It’s an odd story but an interesting one. Like Captain Sender in The Living Daylights Major Smythe is an example of a spy gone wrong. Sender is officious, petty and spiteful in a cowardly sort of way. Smythe was a decent enough chap who succumbed to temptation, which corrupted his soul. Octopussy is a study of the psychology of a spy gone to the bad.

Of the four stories here one is worthless and one is a mere piece of fluff. That leaves us with just two stories worthy of consideration, The Living Daylights and Octopussy. Are they good enough to make the book worth buying? I’d say yes, if you’re a hardcore Fleming fan and you’ve read all (or at least most) of the novels. Recommended, but read the novels first.
Posted by dfordoom at 12:10 PM