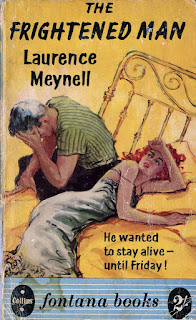 The Frightened Man is a 1952 Hooky Heffernan private eye novel by Laurence Meynell.

Laurence Meynell (1899-1989) was a British writer and he was one of those writers who had a long and successful career only to have his books disappear into oblivion after his death. He wrote at least 150 books in various genre. His detective fiction included the series of Hooky Heffernan private eye mystery thrillers.

Business hasn’t been too good for our narrator, Hooky Heffernan, and his betting on the ponies hasn’t been too successful recently either. He is therefore very happy when a client turns up. A thin rather owlish individual named Edward Ryder. Ryder’s problem is that he needs to stay alive until the following Friday. Obviously he’d like to stay alive after that as well, but surviving until Friday is the immediate priority.

Ryder is a high school science teacher and part-time inventor and he’s come up with an invention that he thinks is pretty exciting. It could revolutionise the textile industry. He’s a clever chap when it comes to science but a bit of an innocent when it comes to dealing with the world. It never occurred to him that there might be powerful interest groups that don’t want the textile industry revolutionised because they’re doing very nicely as it is. Now Ryder suspects that some such group is determined to stop him from developing his invention any further. They’re prepared to take drastic steps to stop him. They’ve already tried to kidnap him.

Hooky thinks of himself as a pretty hardboiled character but he really doesn’t like powerful people who want to push around innocents like Edward Ryder. Hooky takes the case.

Hooky’s first lead comes from the boarding house where Ryder lives. The landlady, Mrs Malden, denies that any such person has ever lived there. Now Hooky is really interested. He picks up some more pointers from two women who seem to be involved in the case but in ways that are not at all clear to our hero. There’s Joyce Malden, the step-daughter of the landlady, and there’s Ann Deighton. Ann is hopelessly in love with Ryder which is awkward since she’s married. Both of these women have connections to men who may also have some interest in Edward Ryder’s future. And a third woman will later make her appearance, to make things a bit more difficult for Hooky.

It doesn’t take Hooky too long to get a pretty fair idea of what’s going on, his main problem being that there are some nasty types conspiring against poor Ryder and there are lots of people mixed up in the scheme whom Hooky may or may not be able to trust. And time is not on his side.

This is a book that is somewhat franker about sexual matters than you might expect in 1952.

It also has some of the disillusioned postwar British austerity atmosphere that is rather interesting. There’s lots of financial deprivation even for the lower middle class and lots of everyday items that are simply unobtainable. Hooky fondly remembers the days when one could actually buy cheese. There’s also a rather stifling social atmosphere. Meynell indulges just a little in subtle but not too intrusive social commentary. Social commentary is something I generally dislike, mostly because it’s usually badly done. In this book however it really is unobtrusive and it’s integrated into the plot. If you must do social commentary this is the way to do it.

Hooky Heffernan is an engaging hero. He’s a slightly irresponsible chap who spends too much time in bars, betting on horses and chasing women. He’s nowhere near as hardboiled as he likes to imagine. He’s genuinely fascinated by people and he has a certain basic decency. He’s a bit of a rough diamond but he’s likeable and amusing.

I love the cover of the 1950s Fontana paperback edition. It suggests a steamy potboiler containing existential despair, torrid romance and maybe even a bit of sleazy sex. But it’s not that kind of book at all.

In the 1950s this is the sort of book you’d have picked up a railway bookstall. It would have provided not-too-demanding entertainment to enliven a dull train journey and by the next day you’d have largely forgotten it. But the next time you had to take a train journey you’d quite happily buy another of his books.

This is a thriller rather than a mystery and the plot is not exactly bursting with originality or inspiration. It’s best described as serviceable. Meynell’s style is bright and breezy, moderately hardboiled in an English sort of way and with some dashes of humour. The main interest in reading this book is that it’s the kind of competently executed harmless entertainment low-key thriller that was so typical of its time. I must admit that I rather enjoyed it. Recommended.