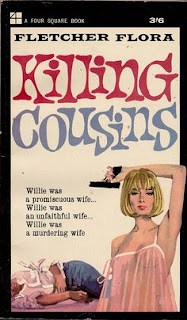 Killing Cousins is a 1961 novel by Fletcher Flora which fits at least vaguely into the noir pulp style of the time.

Fletcher Flora (1914-1968) was an American crime writer. He wrote about nineteen novels. Apart from the fact that he was born in Kansas and served in the military during World War 2 I know nothing about him.

Willie Hogan lives with her husband Howard in Ouichita Road in the town of Quivera. It’s a neighbourhood that has a trace of gentility gone slightly to seed. It’s still a lot better than the neighbourhood she grew up in. The marriage is not startlingly happy or unhappy from Willie’s point of view. Her main complaint is that Howard can be a bit tiresome about her infidelities. Such as the time he came home early and caught her in bed with Evan Spooner. That was just typical of Howard’s thoughtlessness. And Howard has been getting tiresome again about her affair with his cousin Quincy.

These are however minor irritations. Willie can live with these things. But when Howard threatens to leave her, that’s a different matter. Willie likes living in Ouichita Road and being a member of the Country Club and having nice clothes and all the other things that make life pleasant. Especially the Country Club. There are plenty of nice men to sleep with at the Country Club. How is she supposed to maintain this lifestyle without Howard? It doesn’t bear thinking about it. So it isn’t really her fault that she become so upset that she shot Howard.

But now Howard is a big problem. Instead of coming up with a good story right away, such as a burglar shooting Howard, she went to sleep and forget about it until the next morning. But how Howard is still there and he’s dead. Which is typical of his lack of consideration for her. Fortunately Quincy agrees to help her out.

Quincy is a cheerfully amoral sort of guy. Covering up a murder sounds to him like an amusing thing to do. And it’s a challenge worthy of his cleverness. Quincy is a very clever guy.

Quincy is tempted by the idea of coming up with an elaborate plan to dispose of Howard but he has the strong impression that people who do such things in elaborate ways tend to get caught. A good simple plan would be better. The important thing is that it should be thought out carefully and executed just as carefully. 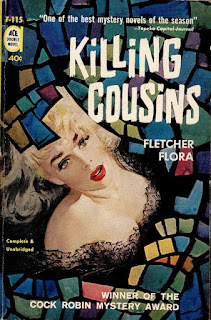 Of course there are little unexpected things that go wrong when you’re trying to cover up a murder but in this case they seem pretty minor. There’s no reason to panic.

Even when Lieutenant Elgin Necessary (yes that’s the cop’s name) starts asking questions it’s no real problem. Necessary is sure it’s just a case of a husband walking out on a wife. He’s not really suspicious at all.

This is not really a hardboiled story at all. Quincy is amoral but he’s not in any sense a tough guy. Willie is selfish and shallow but she’s no spider woman. She just wants an unpleasant situation to go away. Lieutenant Necessary is no hardbitten cop. He’s a nice guy.

There’s a definite touch of Hitchcockian black comedy to this novel, which is no coincidence. Flora wrote a lot of stories for Alfred Hitchcock's Mystery Magazine and a lot of his stories are to be found in the various Alfred Hitchcock mystery fiction anthologies. He was clearly a writer very much in tune with the style of whimsical black comedy that was so characteristically Hitchcockian (and especially the style of Hitchcock’s TV anthology series). This book has the same kinds of amusingly ironic twists that there such a feature of that series, and it has the same slightly tongue-in-cheek tone. And the final twist is amusing.

Killing Cousins is murder as lighthearted witty entertainment which pretty much excludes this book from consideration as noir fiction. The content is such that it could have been noir, but it’s too whimsical to be genuine noir. This is murder as one of those awkward social necessities, a tiresome business like having to pay your taxes.

It is however a thoroughly enjoyable read and is highly recommended.
Posted by dfordoom at 11:20 PM