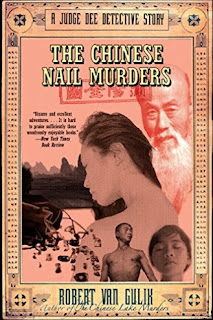 Robert van Gulik (1910-1967) was a Dutch diplomat, orientalist scholar and writer whose first literary endeavour was his translation into English of the 18th century Chinese detective novel Dee Goong An. Published as Celebrated Cases of Judge Dee in 1949 it was a major success. The Chinese novel had been based on the career of the famous real life magistrate and statesman of the Tang Dynasty Dee Jen-djieh (630-700). The success of Celebrated Cases of Judge Dee inspired van Gulik to try his hand at a series of detective novels featuring Judge Dee. His idea was to keep as much of the flavour of traditional Chinese detective fiction as possible (such as the device of having Judge Dee working on three more or less unrelated cases simultaneously) while making his books more palatable for modern readers by largely dropping the supernatural elements.

The fifth of van Gulik’s Judge Dee novels was The Chinese Nail Murders, published in 1961. Dee has just been appointed magistrate of Pei-chow in northern China. In Imperial China the magistrate acted as a combination of judge, jury, district attorney and police detective. As usual Dee is assisted by the faithful Sergeant Hoong and his three underlings Ma Joong, Chiao Tai and Tao Gan (all reformed criminals).

And as usual Judge Dee has three cases to deal with, the most troubling being the discovery of the headless body of a woman. The woman’s husband has been accused of her murder. Judge Dee always pays close attention to the scene of a crime and he finds a number of puzzling items.

There is also the disappearance of a young woman in broad daylight. While his investigations into the first two cases are still proceeding the third case comes along, the poisoning murder of a very respected citizen. He may have left a very cryptic (and clever) dying clue.

There are some tenuous links between at least two of the cases. There’s also a minor case involving blackmail and two girls sold into prostitution which sheds unexpected light on one of the main cases. Of course it’s possible that other links between the three cases may come to light.

Judge Dee and his assistants undertake their investigations in a rigorous and logical manner. Autopsies are performed. Care is taken that crime scenes are not prematurely disturbed and the crime scenes are thoroughly searched for clues. Witnesses are interviewed. All possible leads, no matter how irrelevant they might seem, are followed up. Most importantly Judge Dee does not jump to conclusions. He is very much aware that things are not always exactly how they seem to be. In other words the novel can be seen as a kind of police procedural.

While the Dee Goong An was set in the days of the Tang Dynasty, in the seventh century, it was written a thousand years later and the historical background was a mixture of various time periods. In his Judge Dee novels van Gulik was also not overly concerned to get the historical details of the Tang period absolutely correct although he was certainly knowledgeable enough about Chinese history to have done so. He wanted to preserve the same mixture of elements of different historical eras that he had found in the Dee Goong An.

Chinese detective tales often had very strong supernatural elements, with vital evidence being provided by the testimony of ghosts. Van Gulik realised that modern readers of detective stories would be alienated by such devices but at the same time he was writing about historical periods in which the supernatural was taken for granted. In The Chinese Nail Murders Judge Dee discovers that sorcery is still practised in Pei-chow. This plays no actual rôle in the story but does add a hint of an exotic flavour. There is a kind of prologue however which contains much stronger hints of the supernatural. 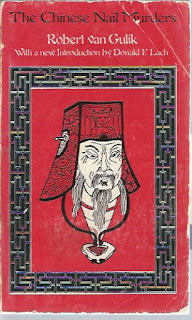 In The Chinese Nail Murders we encounter a system of criminal justice that is in its own way efficient and just but there are certain things that Judge Dee takes for granted that would hardly be accepted today - such as flogging uncooperative witnesses. And a key point in the novel hinges on a very dramatic difference between the Imperial Chinese legal system and modern systems (although I can’t offer you any hint as to what that difference is without revealing a vital spoiler). Judge Dee can be merciful but he can also be (to modern ways of thinking) extraordinarily severe. And even his ideas on being merciful will seem alien in many ways.

Judge Dee is a devoted family man and loves all three of his wives. He loves them in his own peculiar unsentimental way. For Dee everything comes down to duty - duty to family, to one’s ancestors and to the Imperial Government. Personal happiness is of little importance. Dee is not bothered by prostitution but he is shocked and enraged by the thought of a man having sex with his fiancée before the wedding.

Van Gulik took many of his plot elements from ancient case-books or from traditional Chinese detective stories and he very deliberately tried to emulate the style and structure of those stories although adapted to modern tastes (Chinese detective stories were usually inverted mysteries but van Gulik preferred the more conventional western method of concealing the murderer’s identity until the end and he tried to make his novels as fair-play as he could). The somewhat sparse and formal style of his novels is a conscious choice.

The Chinese Nail Murders offers much to enjoy - three clever murder plots, an exotic setting, a unique detective hero and a glimpse into a very different culture. Highly recommended.