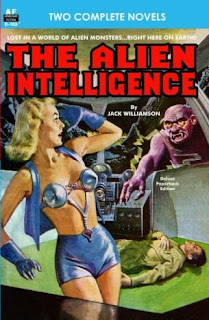 The Alien Intelligence is a short novel by American science fiction writer Jack Williamson (1908-2006). The title suggests some kind of first contact or alien invasion story but this story in fact belongs to the lost world or lost civilisation genre, a genre to which I’m peculiarly addicted. The Alien Intelligence was published in the July and August 1929 issues of the Pulp Wonder Stories making this one of his very very early published works.

A young American doctor named Fowler has travelled to Perth, Australia to begin his medical practice. On the voyage to Australia he had befriended an older man, Dr Horace Austen, a radiologist, archaeologist and explorer.

Austen departs for the arid wastes on the Great Victoria Desert in search of the Mountains of the Moon about which he seems to have some theories. Nothing is heard from Austen for months until a radio message is picked up. The message is cryptic but it is clear to Fowler that his friend is in need of assistance. Being an adventurous young man Fowler sets off for the Mountains of the Moon to find the things referred to in that odd radio message - the ladder, the Silver Lake and Melvar of the Crystal City. He takes several guns and an enormous supply of ammunition with him, and he’ll need them.

Fowler finds the ladder which allows him to ascend an otherwise unclimbable pinnacle of rock. He discovers the nature of the Mountains of the Moon - a vast crater many miles in diameter, the bottom of the crater lying well below sea level.

He encounters the terrifying red streaks of light which seem to be searching the crater, and he finds that in the middle of the crater is a city atop a vast pinnacle of rock. It is the crystal city of Astran, built of diamonds, emeralds and rubies. Astran is inhabited by fair-skinned fair-haired people who seem strangely primitive. Despite living in a city that is clearly evidence of a very advanced civilisation they do not even seem to have mastered the art of kindling fire.

He meets the beautiful blonde Melvar, a young woman who seems to posses an intelligence and nobility of spirit far above that of most of her people. But Fowler and Melvar are in great danger in Astran, having aroused the wrath of the priests. They flee the city to go in search of Horace Austen and to solve the mysteries of the fluorescent Silver Lake, the Purple Ones and those terrifying bars of red light.

There are plenty of mysteries for Fowler to solve. Are the people of Astran the decadent descendants of a once-great civilisation or was Astran built by some other civilisation? How many other civilisations inhabit the great crater? Why does the Silver Lake bring death? How many of the wonders of this land (such as the pillar of silver in the sky) are natural phenomena? Is Fowler right in suspecting that he’s in the presence of both great intelligence and great evil? Is this intelligence human, is it a thing of this earth, is it something supernatural or unfathomably alien?

Of course there’s romance as well as adventure. Fowler falls hopelessly in love with Melvar.

This is the work of a very young man but it has the imaginative sweep and epic qualities that make Jack Williamson’s 1930s space operas so entertaining.

Fowler is a typical adventure story hero, brave and determined and with a strong streak of idealism. Melvar is a pretty typical heroine - she’s sweet and gentle but she’s resourceful and she learns to handle a gun rather skilfully.

This short novel obeys most of the conventions of the lost world genre (which were well and truly established by this time) but gives them a bit of a science fictional twist. Setting the story in Australia rather than South America or Africa or Asia was a nice touch.

The lost world genre was extraordinarily popular from 1882 (when H. Rider Haggard wrote King Solomon's Mines) until the 1930s. It gradually faded because, unfortunately, there were no longer any unexplored parts of the globe left to make such stories plausible. This has in my opinion left a tragic gap in the human imagination. Somehow science fiction tales of adventures on other planets have never quite managed to fill the gap. We lost something precious when the planet ceased to have unexplored corners.

The Alien Intelligence is an impressive effort by a 21-year-old writer and it’s a fine tale of adventure. Recommended, and if you’re a lost world fan I’d be inclined to bump it up into the highly recommended category.
Armchair Fiction have paired this title with Into the Fourth Dimension by Ray Cummings in a two-novel paperback edition.
Posted by dfordoom at 10:25 AM