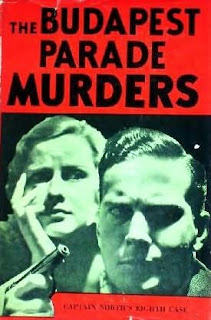 The Budapest Parade Murders appeared in 1935 and was the eighth of the Hugh North books.

The action starts on board a train, which is always promising. A daring assassination attempt has taken place on board the Budapest Express. The intended victim is Sir William Woodman, a prominent pacifist on his way to a disarmament conference. Sir William has collected damning evidence in the form of letters that arms manufacturers are actively involved in trying to start another world war. Unfortunately the would-be assassin succeeded in stealing the letters.

By a stroke of good fortune Captain Hugh North just happens to be aboard the Budapest Express. Also aboard is Major Kilgour of British Intelligence. Perhaps less fortunate is the presence of a pushy American newspaperman.

The disarmament conference is now very much endangered but actually it’s worse than that. The assassination has triggered a wave of mutual recriminations and suspicions and has created an atmosphere with sinister echoes of 1914. If those responsible for the outrage on the Budapest Express cannot be exposed it is not impossible that war will be the result. The Hungarian police are happy to have the assistance of both Captain North and Major Kilgour. Undertaking an investigation in a foreign country is obviously tricky, but it’s North’s job to carry out such delicate missions.

Of course it’s not entirely a straightforward criminal investigation. Hugh North certainly has the skills of a detective but he is an American intelligence agent and he must put American interests first. Major Kilgour, being a British intelligence agent, will also doubtless be putting British interests first. And the Hungarian Chief of Police obviously will be concerned about Hungary’s interests. These three men all sincerely want to avoid war but there is considerable potential for conflicts of interest.

The Hugh North spy tales contain their fair share of action but they’re also reasonably gritty and realistic (certainly much more so than many of the other popular spy thrillers of the 20s and 30s). They’re also surprisingly quite cynical. There’s a good deal of corruption in high places and there are plenty of powerful people who would cheerfully start a war if they stood to gain by it. While North is definitely a patriotic American he is realistic enough to accept the reality that America does not always have entirely clean hands, and that Americans can be as corrupt as anyone else. Diplomacy and espionage are tough games that are played without any concern for morality.

North is more a counter-espionage agent than a spy and he uses some of the techniques of the detective. There is a puzzle to be solved here. The identity of the assassin, and of the assassin’s accomplices, must be established and North has several clues that may help. He found a monocle and some tiny fragments of paper in the compartment in which Sir William was attacked.

In fact it’s structurally rather in the mode of the classic golden age detective story, and it even includes a floor plan! Mostly it’s the unravelling of a murder mystery but with thriller moments to add excitement and with the murder having implications for the fate of the whole world. Hugh North’s plan to unmask the villain involves bringing all the suspects together at a supper party in a palace - exactly the kind of thing you’d expect Hercule Poirot or Ellery Queen to come up with.

There are obviously none of the high-tech electronic gadgets that would become a feature of post-WW2 spy fiction but North does make use of science and technology, and there are what a few years earlier would have been described as infernal machines.

The political background is quite intriguing. This novel was written in 1935. There were international tensions, there are always international tensions, but the new regime in Germany was not yet regarded as a major threat. Nor was Japan seen as an especially significant threat. The possibility of war is therefore somewhat nebulous. Mutual mistrust between Britain and the United States over naval and imperial rivalry seems to be a bigger issue than Germany (and in reality both the British and U.S. navies were making plans in the 1920s for a possible Anglo-American naval war). The fact that the book doesn’t focus exclusively on a single major threat to peace makes it rather interesting.

In fact the biggest international evil in this story is not represented by governments but by arms manufacturers (and the politicians they have corrupted). This might make it sound like a socialist or pacifist tract but it isn’t. North is just a straightforward patriot who has fought in one war and is hoping not to have to fight in another.

The spy fiction of the interwar years was quite varied, ranging from pure boys’ own adventure fantasy stuff (like the Bulldog Drummond stories) to the darkness and cynicism of Eric Ambler. The Budapest Parade Murders is somewhere in the middle. It’s more realistic than Bulldog Drummond stories but not as grim or nihilistic as Ambler or Greene, and it’s not quite a pure thriller and not quite a pure mystery. It is entertaining though. It’s recommended, as is his earlier The Branded Spy Murders.
Posted by dfordoom at 8:18 AM