E. Howard Hunt's One of Our Agents Is Missing 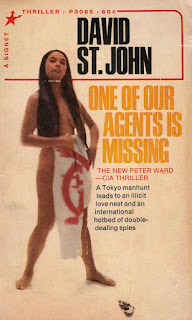 E. Howard Hunt (1918-2007) is of course best known for his rôle in the Watergate scandal for which he served nearly three years in prison. He was a career CIA agent who was involved in many of the agency’s most infamous operations (such as the Bay of Pigs fiasco). Hunt was also a prolific author of both hardboiled detective and spy novels. One of Our Agents Is Missing, published in 1967 under the pseudonym David St. John, is one of his espionage thrillers.

Schuyler Brooks (known to his friends as Sky) has disappeared from his home in Tokyo. Given that he’s an important CIA operative and given that $6,000 of the agency’s money disappeared at the same time the CIA is not very happy. However they take the view that if he’s defected there’s nothing they can do about it and if he hasn’t defected he’ll eventually show up. He separated from his wife six months earlier and moved in with a Japanese girl named Miyoki. Maybe he cracked up. It’s not worth losing any sleep over.

CIA agent Peter Ward doesn’t see it that way. Brooks was a friend and Brooks’ wife is an old friend as well. Peter takes some leave and heads for Tokyo to find out what exactly happened to his buddy.

Peter doesn’t find any trace of Brooks but he does stumble upon something else, something very big indeed. It’s something the CIA wants so badly that Brooks is soon forgotten. Tis something is not just a defector but one who has something else to sell besides his loyalty. The problem is that too many people know about it. The even bigger problem is that there’s no way of knowing just how many people know. Japanese Intelligence, the Russians, the Chinese and maybe some independent operators - all could be involved. The operation might be blown before it starts, but it might not.

While Peter doesn’t find Brooks he does find Miyoki, who seems anxious for him to share her bed. Peter however is no James Bond and politely declines.

Peter is more worried about all the people trying to kill him, and kill him in rather imaginative ways (such as using a sumo wrestler as an assassin). There’s also the possibly he may be dealing with a ninja. There’s also a fortune teller involved.

This might make the book sound like an outrageous Bond-Style spy thriller. It’s actually pretty serious in tone but if you’re going to use Japan as a setting you might as well throw in some local colour. And Hunt does this with a certain amount of style. Japan was one of the many places Hunt was stationed during his CIA career and he was obviously a guy who took a lot of interest in the local customs. I’d venture to say that he was also a guy who liked good living - he’s more obsessed by food and liquor than even Bond.

Hunt was a very successful writer but as a result of his involvement with Watergate his novels were shunned by critics. That’s rather unfair. He wrote well in the hardboiled genre (his 1961 crime novel House Dick is excellent) and judging by One of Our Agents Is Missing he was a more than competent writer of espionage thrillers.

One of Our Agents Is Missing has plenty of action and the action scenes are well thought out, the atmosphere of treachery and deceit is maintained with admirable skill and there’s some decent suspense. Peter Ward is an effective hero. He’s a bit of a Boy Scout in some ways but he makes mistakes which makes him more human. And surprisingly (given that Hunt was rabidly anti-communist) he even gives us a vaguely sympathetic portrait of a communist master spy. His villains are just a little bit more than cardboard cut-outs.

Hunt also, of course, knew the espionage game from the inside. He wasn’t the kind of intelligence officer who spent his whole career behind a desk - he was actively involved in covert operations so he knew his tradecraft.

One of Our Agents Is Missing is actually a pretty solid spy thriller. I recommend it, and the historical interest of the author’s own espionage career might even be enough to bump it up into the highly recommended category.
Posted by dfordoom at 6:08 AM