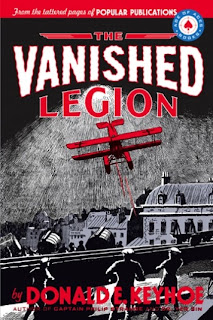 Donald E. Keyhoe became quite well-known in the 1950s and 1960s as a UFO researcher. In the 1930s he’d been a prolific contributor to pulp magazines and it’s clear that the former Marine Corps pilot’s interest in the weird was already very well established. The seven stories in The Vanished Legion were published in Dare-Devil Aces magazine from 1932 to 1934.

The Vanished Legion is a top-secret squadron of American airmen on the Western Front in the First World War. The first story, The Squadron of Forgotten Men, establishes the backstory.

These men are all officially dead. They had been fighter pilots engaged in espionage work and had been captured and tortured and horribly disfigured by an insane German master-spy. They had later escaped. A brilliant French surgeon repaired the damage to their faces, but he could not reproduce their original features exactly. Their faces are now unmarred, but they’re not the same faces. The fact that they were all listed as officially dead and the further fact that they are now unrecognisable combine to make them uniquely valuable as spies and counter-spies. All speak German fluently.

They are based in a top-secret hidden base located in a cavern in the Vosges Mountains. They are equipped with captured German aircraft and supplied with German uniforms for missions behind enemy lines. Their leader is Captain Dick Traine, a typical square-jawed pulp hero.

These are not just stories of aviation and espionage. There’s plenty of aerial action and plenty of standard pulp two-fisted hijinks but there are also very generous helpings of the weird, the horrific and the science fictional.

The “Vanished Legion” come up against a variety of brilliant but sinister enemies. Their enemies are always German master-spies or intelligence officers but they bear a much closer resemblance to the diabolical criminal masterminds and mad scientists who always featured prominently in the pulps.

These enemies come up with an extraordinary array of fiendish plots to destroy the air forces and armies of the Allies and win the war quickly for Germany. Their schemes include gigantic bombers, death rays, invisible aircraft, submarine aircraft carriers, super-fast fighter aircraft capable of speeds far beyond anything envisaged during the First World War, robot aircraft, even midget pilots flying midget fighter planes!

As you might expect from an author who later interested himself in UFOs Keyhoe always tries to give some vaguely plausible scientific (or at least pseudoscientific) basis to these plots. You won’t come across any real ghosts or monsters in these stories. You will come across things that might appear supernatural (such as sinister disembodied voices prophesying death and disaster) but they always turn out to be some kind of ingenious technological contrivance. The invisible aircraft for example are coated with special paint to make them virtually impossible to see in normal light - they’re basically 1918-vintage Stealth Fighters.

Keyhoe isn’t overly concerned to make these ideas plausible. As long as the ideas are bizarre and fantastic and can be given a pseudoscientific gloss with technobabble he’s quite content. Given that he had considerable success in the pulps it’s obvious that his readers were quite content as well. And his technobabble is certainly entertaining technobabble.

The stories themselves rely on disguises, narrow escapes, lots of gunplay and fisticuffs and plenty of suitable pulp hero-type dialogue. Dick Traine and his comrades are totally two-dimensional brave, noble and super-tough heroes but this is pulp fiction and no-one wants complex tortured heroes in stories like these. The villains are ruthless, brilliant, utterly evil and completely unhinged. They are fiendishly clever but prone to making the sorts of dumb mistakes that will allow the heroes always to get the better of them in the end.

If you have any tendencies towards aviation geekdom and you enjoy science fiction and pulp fiction then Keyhoe’s stories should satisfy all your cravings. Even if you’re not an aviation geek you should still enjoy them - he doesn’t get too involved in complex technical  details of aerial fighting (although if such things do excite you he does appear to know his stuff).

There are several other collections of Keyhoe’s available, all covering the same type of subject matter. Strange War recounts some of the adventures of stage magician and hypnotist-turned fighter pilot and spy Captain Philip Strange, and they’re great fun as well.

The Vanished Legion is fine pulp entertainment. Recommended.
Posted by dfordoom at 4:17 AM