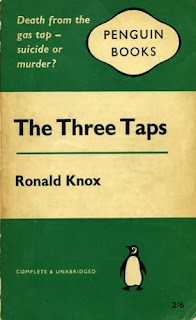 Published in 1927, The Three Taps was the second detective novel by English priest, theologian and crime writer Ronald Knox (1888-1957). It introduced his detective Miles Bredon who would figure in all of Knox’s subsequent detective novels.

Miles Bredon is a private detective employed by the Indescribable Insurance Company. He is brought in to investigate the death of a wealthy industrialist named Mottram. Mottram had taken out one of the Indescribable Insurance Company’s more interesting policies, a policy that promises either vast riches to his heirs if he dies before the age of sixty-five or a handsome annuity for life for the insured party if he lives beyond sixty-five. Mottram had made enquiries about modifying his policy in a manner that will considerably influence the investigation of his death.

Every detective needs a Watson. Bredon’s Watson is his wife Angela, although (unlike most Watsons) she does not narrate the story. And while most Watsons are well-meaning but decidedly in the intellectual shadow of the detective Angela is actually smarter than Miles.

Not that Miles is stupid. Far from it. His problem is that he is lazy and has little enthusiasm for his work. He likes his job with the Indescribable Insurance Company because it involves very little work. Bredon is content to investigate most of his cases in a rather desultory manner, but on rare occasions he encounters a case that engages his interest. When that happens the usually lazy Bredon suddenly comes to life and becomes not only a determined and tenacious detective but also a surprisingly brilliant one. The Mottram case is one of those cases.

Arriving in the rather dreary village in which Mottram met his end Miles Bredon finds that his old friend Inspector Leyland from Scotland Yard is already on the case. Leyland is no fool; in fact he’s a fine detective. Leyland and Bredon draw very different conclusions almost at once. There are certain pieces of evidence that convince Bredon that Mottram’s death was suicide, while there are certain other clues that convince Leyland just a strongly that it was murder. The problem for Bredon is that while he is absolutely convinced this was a suicide he has to admit that Leyland’s evidence for murder is perfectly valid and it does make it difficult to prove suicide. Leyland on the other hand, while being quite sure it was murder, has to confess that the clues on which Bredon has based his suicide theory are also quite valid and quite compelling.

The dead man was found in his room in the village’s inn. The room was filled with gas when the corpse was discovered and the doctor who examined the body had no doubt that the gas was the cause of death. That becomes the one fact on which everybody agrees. There were two gas outlets in the room, controlled by three taps. The position of the three taps becomes the crucial point on which the case will rest, since it causes major difficulties  not only for both the suicide and murder theories but also for the only other possible explanation, accidental death.

Ronald Knox was a noted wit it’s not surprising that this novel is as strong on humour as it is on detection. For Knox the detective story was both a stimulating intellectual exercise and a great deal of fun. This novel combines the ingenious and intricate plotting of the golden age detective story with humour, and does so very successfully.

Insurance policies and ambiguous wills were favourite plot devices at the time and Knox gives us both. To add a further layer of complexity Knox (a Catholic priest and an enthusiastic Catholic apologist) adds a possible religious motive, a motive that turns on a nice point of theology. Surprisingly Knox carries this element off with a good deal of skill and subtlety. It adds an interesting dimension and it’s done in such a way that a reader who does not share Knox’s faith will still find it to be a challenging and intriguing clue.

Miles and Angela Bredon make a very engaging detective couple and their verbal sparring is always a delight. The supporting characters are colourful and amusing. Knox’s dialogue sparkles and his style is civilised, urbane and unfailingly entertaining.

The Three Taps is golden age detective fiction at its finest. Immensely enjoyable and highly recommended.
Posted by dfordoom at 8:42 AM