Cult of the Corpses 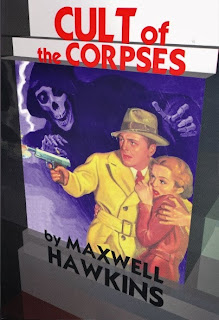 The weird detective story on the other hand was an off-shoot of the American hardboiled crime story. Supernatural, science fictional or other bizarre elements are tacked on to the basic hardboiled crime story in order to increase the sensational content. The weird detective story was emphatically American. Literary polish was not very much in evidence.

Pulp magazines had from time to time published crime stories with weird elements in the 20s but for a short time in the 30s it became a moderately thriving genre.

The two stories in this collection, Cult of the Corpses and Dealers in Death, were both published in Detective Dragnet magazine in 1931.

Cult of the Corpses sees Assistant District Attorney Benton McCray plunged into a bizarre world of voodoo in New York, and his girlfriend Nan Collette is in line to be the next victim of the murderous voodoo cult. McCray is not easily intimidated by the usual dangers that are part of the job when you’re fighting crime in a big city but this cult poses very different kinds of dangers. While gangsters might not think twice about mowing down their enemies with sub-machine guns the voodoo cult threatens its enemies with a fate worse than death - being transformed into zombies! And this story offers both zombies and machine gun-toting mobsters.

With these ingredients it would be difficult not to come up with a fairly exciting story and Cult of the Corpses is fine pulpy fun. There are all the usual fun elements you expect from a pulp story - narrow escapes, plenty of action, hardboiled dialogue - and it all holds together quite well. Hawkins appears to have done some research on the subject of voodoo in Haiti. Transplanting the voodoo cult to New York City was an obvious move and it works.

Dealers in Death is slightly different. It lacks any supernatural elements but compensates for this by giving us a sinister villain with bizarre methods. Letherius claims to have invented literally hundreds of methods of committing murder that are absolutely guaranteed to be undetectable and he’s turned his obsession into a thriving murder-for-money business. Villains in pulp stories have a tendency to overshadow the heroes and that’s certainly the case here. Fortunately Letherius is sufficiently interesting and sufficiently menacing to keep the reader’s attention riveted.

Maxwell Hawkins (1895-1962) was a newspaperman who had a fairly brief career as a pulp writer in the 1930s. After marrying in 1937 he seems to have largely abandoned his efforts in this arena to concentrate on the more certain rewards of his newspaper career.

Cult of the Corpses and Dealers in Death are both highly entertaining slightly off-beat stories that should delight pulp fans. This volume can certainly be recommended.
Posted by dfordoom at 5:05 AM