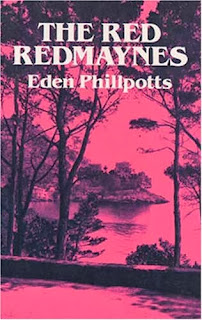 Eden Phillpotts (1862-1960) had a long and very prolific career as a writer. Crime fiction formed a very minor part of his work. Mainstream writers often stumble when they attempt genre novels but occasionally the results can be rather intriguing, and Phillpotts’ 1922 novel The Red Redmaynes is both fascinating and highly unusual.

Phillpotts’ greatest contribution to crime fiction was an indirect one. A young female acquaintance had expressed an interest in trying her hand at crime fiction and it was to a considerable degree as a result of Phillpotts’ advice and encouragement that her first attempt in the genre was published in 1920. That first attempt was The Mysterious Affair at Styles and the aspiring young writer’s name was Agatha Christie.

Phillpotts’ own approach to the genre in The Red Redmaynes is quite unlike anything you would normally expect from the golden age of crime fiction. While it’s not entirely successful it is unconventional enough, and structurally daring enough, to make it of considerable interest to devotees of crime fiction.

Unfortunately most of the elements that make the book so structurally interesting cannot be discussed in anything other than the vaguest terms since they’re absolutely critical to the plot and any attempt to discuss them would entail the risk of revealing spoilers, something I have no intention of doing.

What I can say safely enough is that this book is a rare example of an unusual and unconventional structure being used not as a stylistic experiment but as the very driving force of the plot.

The key events that drive the plot occur in Dartmoor, a part of England that Phillpotts passionately loved and used as a setting for most of his books and stories.

A young detective-sergeant from Scotland Yard, Mark Bredon, happens to be on the scene when a rather shocking murder takes place. A young man has been brutally done to death and the circumstances point to his wife’s uncle as the slayer. The Redmaynes are a prominent and wealthy local family. Their fortune was founded on sheep farming in Australia. The Redmayne who made the family fortune is now dead, leaving three surviving sons. One son lives in Italy while the others live in Devon. They are the only living members of the Redmayne family apart from Jenny Pendean, the extraordinarily beautiful young daughter of the deceased elder brother. Her husband was the murder victim and her uncle Robert Redmayne is not only the prime suspect; he is the only suspect.

The case seem straightforward enough to Mark Bredon but oddly enough the perpetrator proves to be remarkably difficult to catch. This puzzles him since it seems quite clear that this was a murder committed by a madman, and a madman whose identity is known should not be difficult to find. In normal circumstances the difficulty in tracking down the murderer would make this a frustrating case but Mark Bredon’s fascination with the beautiful young widow Jenny Pendean offers some compensation to the detective.

The first half of the book covers a period of about a year during which the search for the killer continues in a desultory fashion until events take an unexpected and violent turn.

Without risking any spoilers I can note at this point that while Mark Bredon is the detective assigned to the case, and he is also the novel’s central character, he is not in fact the book’s detective hero. The actual detective hero is a semi-retired American policeman named Peter Ganns who makes his first appearance in the story at an astonishingly late stage, this being one of the novel’s many unusual features. Another feature that is rather unusual is the use of an American detective hero by an English writer, and a very English writer indeed.

Serious fans of the crime fiction of the so-called golden age, the 1920s and 1930s, may have some issues with the author at times, especially in regards to the question as to whether he has played entirely fairly with the reader. They may also find the mystery rather too easy to solve. These are valid criticisms but on the other hand it has to be remembered that Phillpotts was not a writer of detective stories as such. In this novel he is more interested in the psychology of the detective protagonist than in presenting the reader with a complex puzzle to solve. And there’s no question that the author’s handling of this aspect of the book is skillful and compelling. The book is also notable for the skill with which Phillpotts entwines his unravelling of the protagonist’s psychology with the plot.

Crime fiction fans might also feel the book is somewhat too long but that may perhaps be an unfair criticism given that it is essential for the author’s intention that the reader should be drawn into the protagonist’s interior world.

The Red Redmaynes is something of an oddity but at the same time it proves to be a surprisingly rewarding oddity. Recommended for those with a taste for crime fiction that is a little out of the ordinary.
Posted by dfordoom at 2:52 AM