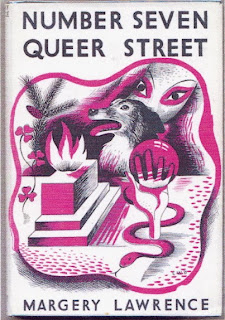 Margery Lawrence’s Number Seven Queer Street was a rather late entry in the occult detective genre, appearing in 1945. The author was clearly influenced by earlier writers in the genre like Algernon Blackwood and this collection of seven short stories is fairly typical of this fascinating genre.

Lawrence’s occult detective is Miles Pennoyer, although he prefers to be known as a psychic doctor. This is in fact the one factor that distinguishes this collection from others in this genre - Pennoyer’s cases do tend to be more like medical investigations than the cases an occult detective would normally take on. In many of the stories nothing really bizarre or inexplicable has happened, there are no signs of hauntings and similar phenomena. Pennoyer has been called in because someone is concerned that a family member just isn’t quite right although they can’t offer any real explanation. It’s a sense of vague unease that there is something wrong with the person, something that appears to have no physical cause and doesn’t seem to fall within the realm if mental disturbance as such.

Miles Pennoyer is of course a man with a very deep knowledge of the occult, to the extent that he is quite comfortable to describe himself as a magician. It is very definitely white magic that he practises of course.

Any Holmes, no matter how unconventional, has to have his Watson and Pennoyer’s Watson (who in conformity with the established detective story convention serves as narrator) is a successful novelist who has some limited psychic abilities. Slightly unusually, in most of the stories he merely acts as narrator of adventures in which he played no active rôle (although he does played a very active part in The Case of the Moonchild).

Margery Lawrence was either quite well versed in the occult herself or she was very good at making this sort of thing up. Pennoyer operates according to a very definite philosophy of the occult, a philosophy that is developed in some detail during the course of these seven adventures.

The Case of the Bronze Door deals with reincarnation, a theme that will recur (although less prominently) in other stories. It’s a nicely ambiguous story. Pennoyer is faced by an entity that certainly has the ability to do great harm, but it is not an entity that is evil as such. The Case of the Haunted Cathedral certainly involves an evil act, an act that threatens to destroy an architect’s crowning glory, but Pennoyer’s concern is to bring redemption rather than punishment to the author of this evil.

The Case of Ella McLeod is more an occult tragedy than a battle with evil. There’s no real evil at all here, although there is very human pettiness that has tragic consequences. This is another story that deals with reincarnation of a sort but this time Lawrence is aiming to engage the reader’s sympathies rather than to scare or horrify.

The Case of the White Snake is again a tragedy, and again the tragedy is aided if not actively caused by actions that were not intended as evil. It’s one of several stories involving children. In some stories a child is the agency of evil but more often the child is the potential victim. Like The Case of Ella McLeod in some ways it evokes the tragedy of the loss of the past. Both stories are poignant rather than scary but they work fairly successfully and Lawrence avoids indulging in the excessive sentimentality that could so easily shipwreck this type of story.

Lawrence hits top gear with The Case of the Moonchild. This time Pennoyer is confronted by very real evil and this time the threat is not merely to an individual’s or a family’s happiness; this time he faces evil on the grand scale. This is the most colourful and by far the most lurid of the Pennoyer stories and it’s the story that is closest in feel to real full-blown horror. While most of the stories in this volume are successful in evoking a sense of the uncanny this one is the one that works most successfully as pure entertainment.

The Case of the Young Man with the Scar is the longest story in the collection, and it’s the least successful. In this tale Lawrence succumbs to one of the most irritating of writerly vices, the absurd almost-deification of nature contrasted with an even more absurd demonisation of civilisation.  It didn’t quite move me to hurl the book across the room but the thought did cross my mind. It’s also the most poorly structured and rambling of the stories and in general I would have to say that I found this particular story to be a complete and abject failure.

The Case of the Leannabh Sidhe deals with an eleven-year-old boy who seems to have the ability to frighten everyone he comes into contact with. The explanation involves both fairies (the darker and nastier Celtic kind rather than the cute domesticated kind) and golf. And it’s an excellent little tale.

Number Seven Queer Street is an uneven volume but it remains an interesting addition to the occult detective canon. Lawrence generally (with the exception of the one major blemish mentioned earlier) writes very well. Miles Pennoyer is a hero who manages to be brilliant without being annoying. There’s enough occult detail to be satisfying without becoming tedious. This volume earns a definite recommendation although it has to be admitted that getting hold of a copy may present something of a challenge.