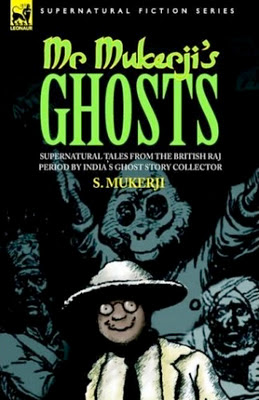 Mr Mukerji’s Ghosts was originally published in 1917 as Indian Ghost Stories. Mr Mukerji compiled a heterogenous collection of ghost stories from the period of the British Raj, purporting to be based on stories he’d heard as well as articles from various Indian newspapers.

Many of the stories have an unfinished feel. They’re almost fragments, but that’s the charm of the book. It’s very conversational. It’s like taking one’s seat on a train and finding that the passenger in the next seat happens to be a collector of ghostly tales and he starts recounting them. Some are merely snippets of gossip, some are what today would be called urban legends, some are clearly tall tales while others have a disturbing feeling of authenticity to them.

These Indian ghosts are often rather benign. Some are content to do little more than to be the cause of very minor odd happenings, happenings that could almost be dismissed as having no significance at all and yet the rational explanations that are offered don’t quite succeed in convincing.

Some of the ghosts simply want small favours, like having their tombs repaired. One wants nothing more than a meal of mutton and vegetables. There’s a touch of whimsicality to many of these tales, but there are a few that are genuinely chilling, or disturbingly tragic.

Not all the stories involve ghosts. There are a couple that deal with black magic, although perhaps it’s more grey magic since it’s not all that malevolent. One story could even be described as paranormal rather than supernatural.

I’m not even certain that Mr Mukerji actually existed. This indefatigable collector of ghost stories might for all I know have been the invention of some unknown Indian man of letters (or perhaps not even Indian). A quick google search failed to turn up anything.

Apart from the ghostly aspects the book offers some fascinating glimpses of a vanished age and some glimpses also into the varied folklore of the Subcontinent.

If you enjoy ghost stories that are odd and subtly unsettling rather than overtly terrifying then this unassuming little volume may be just what you’re looking for.
Posted by dfordoom at 6:54 PM