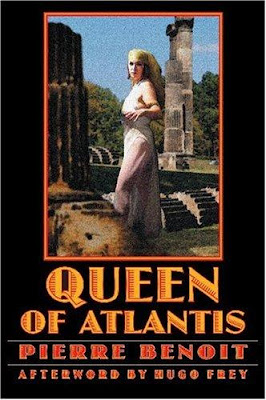 Pierre Benoit (1886-1962) enjoyed enormous popularity during his lifetime and a considerable degree of literary acclaim as well. He was elected to the Académie française in 1931. Queen of Atlantis (L’Atlantide) was the second and probably the most famous of his forty-two novels.

He is out of favour these days, his conservative political views being sufficient to make him an unperson in today’s literary world.

Queen of Atlantis was slightly controversial at the time of its publication in 1919, its similarities to H. Rider Haggard’s classic She leading to accusations of plagiarism (although Haggard himself made no such accusations). While both books draw their inspiration from the same mythological and historical sources and there are thematic resemblances the two books are sufficiently distinct to stand on their own merits.

The setting is the French colonial empire in North Africa at the close of the 19th century. A new officer has arrived to take command of the small fort of Hassi-Inifel in the Sahara. Captain Saint-Avit is a rather notorious personage. On a previous expedition it is widely believed that he was responsible for the death of his colleague Captain Morhange, and in fact may have murdered him. There was insufficient evidence for any charges to be laid and Saint-Avit’s own account of the events was regarded as being unreliable due to the circumstance that he was suffering so severely from fever and general exhaustion when he was found.

Saint-Avit relates his strange tale to a brother officer.

Morhange was a man of slightly mystical bent. He had taken several years leave of absence from the army with the intention of taking religious orders but then returned to military service. Morhange is slightly evasive as to his purpose in undertaking the expedition with Saint-Avit. He is very interested in certain inscriptions regarding a woman named Antinea, presumably a queen from the distant past. Whatever it was he was searching for, what they find is beyond all expectations. It is nothing less than a hidden kingdom.

It is more than that. It is Atlantis. And it is ruled by Queen Antinea. Among her subjects are three ill-assorted and slightly disreputable Europeans. They are not the only Europeans to have reached Antinea’s kingdom. The others are to be found in the Hall of Red Marble, embalmed and encased in an unknown metal. When Morhange and Saint-Avit enquire what these men (there are over fifty of them) died from they are informed that all died of love. And died willingly.

These are Antinea’s former lovers. When she tires of them they die. She does not put them to death. They simply cannot live after being discarded by her. Some seek death through drugs, or drink, or suicide, or they simply die.

Escape from Antinea’s kingdom is almost impossible. One man did escape but a few years later he found himself compelled to return. Dying of love for Antinea seemed preferable to living. Saint-Avit and Morhange are destined to end up in The Hall of Red Marble, but Morhange is not like the queen’s other suitors and perhaps the cycle can be broken.

Antinea herself may be timeless, she may be immortal, she may be unimaginably old (the book is deliberately vague about these details), or she may be as much a victim of her own cult as her lovers.

Modern critics will find it difficult to resist the temptation to see the novel as expressing a negative view of women but in fact that’s not at all what the book is about. It was written just after the First World War and reflects the mood of extreme pessimism and despair that afflicted intellectuals at that period (a mood that has arguably had a fatal influence on the subsequent course of western civilisation). It in fact represents a kind of fatalistic death cult. It’s not so much a metaphor for the war as a metaphor for a world that has lost all hope. Which makes it peculiarly relevant to our own age.

The afterword by Hugo Frey is worth reading simply as an illustration of the deadly effects of political correctness and postmodernism on literary criticism. The irony is that it is Frey rather than Benoit who is unable to escape the narrow-minded prison of his own times.

This novel has been seen as a precursor of magic realism, and that’s not unreasonable. either way it’s an immensely fascinating tale which I recommend very highly.
Posted by dfordoom at 4:54 AM