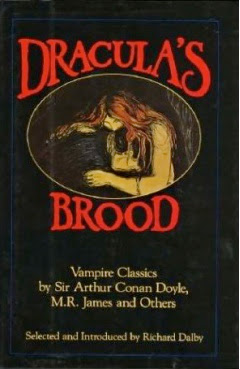 Dracula’s Brood, edited by Richard Dalby, is an anthology of vampire tales, and is in fact one of the best of its kind. The stories range in date from 1867 to 1940, and thus include several pre-Stoker vampire stories.

Phil Robinson’s The Man-Eating Tree is one of the strangest. As the title suggests, it’s about a vampiric tree! Anne Crawford (sister of the better-known F. Marion Crawford) contributes A Mystery of the Campagna, a nicely atmospheric tale of artists and vampiric obsessions. Julian Hawthorne’s Ken’s Mystery is a moody tale of vampires in Ireland, and the fatal lure of the past.

Some of the more interesting stories deal with what are really psychic vampires rather than conventional bloodsuckers. Vincent O’Sullivan’s Will is probably the strongest story in the anthology, and Conan Doyle’s The Parasite is almost as good. Mary E. Braddon’s Good Lady Ducayne is also an unconventional vampire story, again dealing with vampirism as parasitism, but this time with the elderly preying on the young. Vernon Lee’s Marysas in Flanders isn’t really about vampires at all, but rather about pagan gods, but it’s very effective nonetheless.

The 20h century stories aren’t quite as strong, although Ulric Daubeny’s The Sumach is another creepy story of plant vampires. I particularly liked E. R. Punshon’s The Living Stone, combining as it did vampirism, human sacrifice and forgotten gods.

There are surprisingly few really poor stories in this anthology, Hume Nisbet’s The Vampire Maid being the only real failure.

The best thing about this volume is that most of these stories aren’t found in the other major vampire anthologies - Dalby has done a terrific job in unearthing some very obscure but very very fine stories. This book is a must for any serious vampire enthusiast.
Posted by dfordoom at 5:45 AM