The Saltmarsh Murders, by Gladys Mitchell 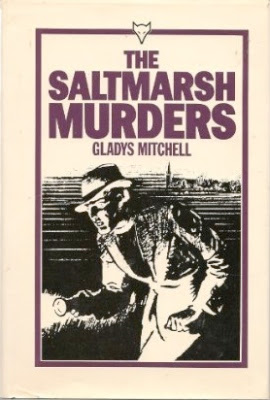 The Saltmarsh Murders, which appeared in 1932, was the fourth of Gladys Mitchell’s sixty-six Mrs Bradley mysteries. In some ways it’s a very typical example of golden age detective fiction while in others it’s more of a hybrid.

It has all the faults (or if you happen to be a fan of golden age mysteries as I am, all the virtues) of its type. The plot is convoluted and wildly implausible. The detective solves the mystery quickly but refuses to reveal the identity of the guilty party even to her loyal lieutenant on the grounds that she has insufficient proof.

On the other hand the detective in this instance happens to be a psychoanalyst so it points the way forward to the modern type of crime novel with its obsession with psychological factors which are usually far more implausible than even the wildest flights of fancy of golden age detective fiction. Depending on your point of view this novel could be seen to embody the best, or the worst, of both worlds.

The story is narrated by Noel Wells, the good-natured if not overly intellectual Anglican curate of the village of Saltmarsh, somewhere in England. He is not especially fond of the vicar, Mr Coutts, and he is even less fond of the vicar’s wife. But the position does have its compensations. Well one compensation in particular, the vicar’s niece, Daphne. Daphne and Noel are very much in love.

The vicarage is thrown into turmoil when the housemaid falls pregnant. The local innkeeper, Mr Lowry, agrees to take her in. The girl, Meg Tosstick, refuses to say who the father of her child is. And when the child is born no-one is allowed to see it. This encourages various rumours, mostly based on the assumption that the baby must bear a striking resemblance to its father. The vicar and the local squire are both widely regarded as being possible candidates. Then Meg is murdered. Bob Candy, who works at the inn and was known to be Meg’s young man until fairly recently, is arrested.

Most of the villagers find it difficult to believe he was capable of murder. Fortunately Mrs Bradley is a house guest of the squire at this time. Her reputation as an amateur detective is well established and she and Noel join forces to conduct their own investigation. A second murder will follow, a murder that at first appears to have no obvious connection to Meg Tosstick’s murder.

Mrs Bradley’s method of crime-solving relies more on psychoanalysis than traditional investigative techniques. She also has curious ideas about the law and morality. She regards murder as being not necessarily a crime. She is terribly modern in her notions, to an extent that often shocks the rather innocent young curate.

Mrs Bradley is herself a colourful character and Gladys Mitchell populates the novel with a whole gallery of equally colourful and bizarre personalities. Her style very definitely tends towards a tongue-in-cheek approach. Mrs Bradley is very much the star and whether you enjoy the book will depend entirely on whether you warm towards the eccentric, opinionated and rather over-the-top elderly detective.

Mrs Bradley’s psychoanalytical approach to crime does stretch credibility at times but on the while it’s an amusing read.
Posted by dfordoom at 1:55 AM