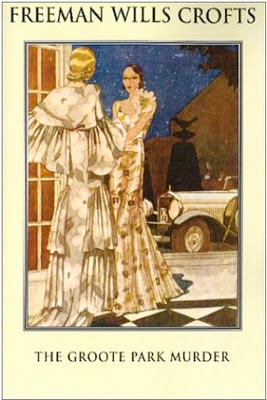 Freeman Wills Crofts had worked as a railway engineer and when he turned to writing detective fiction this background became very important. He was fascinated by the minutiae of railway timetables and in his plots timing is everything. The Groote Park Murder, published in 1923, illustrates this to perfection.

A man is found dead next to a railway line in South Africa. It is assumed that he has been the unfortunate victim of a tragic accident, or possibly suicide. Inspector Vandam is not entirely easy in his mind about this case and it’s not long before he uncovers evidence that points to murder.

There are several promising suspects but the problem is that the most likely suspects have watertight alibis. Suspicion naturally shifts towards those suspects whose alibis turn out to be less than rock-solid. Inspector Vandam accumulates sufficient evidence to make an arrest but the case will soon present the first of its major surprises.

Two years later a crime is committed in Scotland, a crime that appears to be linked to that earlier South African murder, and that also appears to involve many of the same players. Detective Inspector Ross is in charge of the Scottish investigation and once again the questions of timing and of alibis dominate the case.

Alibis can be vital evidence to a detective but they can mislead as well.

Crofts constructs his book in the same way that his detectives conduct their investigations - by a patient accumulation of evidence. That might sound a little dull but his plotting is skillful enough to make it work.

This is a rare example of a detective novel with two detectives working completely independently of each other, in different countries and at different times.

This is classic golden age detective fiction, entirely plot-driven but done extremely well.
Posted by dfordoom at 10:00 AM