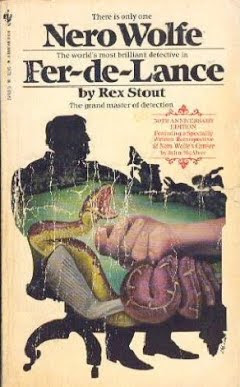 Fer-de-Lance was the first of Rex Stout’s Nero Wolfe mysteries, and it also marks my first acquaintance with this famous fictional detective.

I’ve always had a soft spot for colourful, larger-than-life eccentric fictional detectives, and Nero Wolfe certainly qualifies on all three counts. And in his partner (or to be more precise his employee) Archie Goodwin he has the perfect foil. As Loren D. Estleman points out in the introduction to this novel the combination of these two characters rather neatly brings together the classic golden age detective story with its emphasis on puzzle-solving (represented by Wolfe) and the hardboiled school (represented by Goodwin).

With the Depression in full swing (the book was written in 1934) money is rather tight in Nero Wolfe’s West 35th Street brownstone. He has had to cut back on his staff although so far he is still able to indulge his passion for growing exotic orchids. He badly needs a lucrative case. The disappearance of Carlo Maffei seems unpromising at first but when it transpires that his vanishing act is connected with the mysterious death of Peter Oliver Barstow, the president of Holland College, Wolfe’s interest becomes considerably keener.

Barstow had suddenly collapsed on the golf course, apparently the result of a stroke. The coroner and the DA were certainly satisfied. Wolfe really puts the cat among the pigeons when he boldly announces that Barstow was murdered, poisoned in fact. Poisoned by means of a golf club.

Plotting isn’t really this novel’s great strength. The character of Nero Wolfe himself is the main interest of the book, and luckily he’s more than sufficiently interesting to carry the novel. The sparkling and witty style of Stout’s writing is also a considerable help.

This is a highly entertaining romp of a book. Definitely recommended.
Posted by dfordoom at 11:49 PM