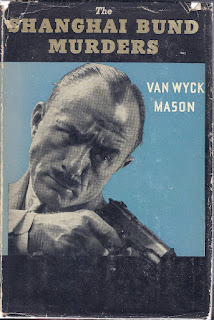 When Mason wrote the first of his twenty-five Hugh North novels in 1930 spy fiction had been around for quite a while but it was mostly a British affair. The big names of the genre - William Le Queux, E. Phillips OIppenheim, H.C. McNeile (“Sapper”) and John Buchan - were all British. Spies in American fiction were confined to pulp fiction and usually featured in outlandish tales incorporating elements of science fiction or the fantastic, or they were essentially wartime adventure stories. There wasn’t really an American school of true serious spy fiction. Mason was a pioneer.

The next important step in the history of American spy fiction would be the appearance of the first of John P. Marquand’s Mr Moto novels, Your Turn, Mr Moto, in 1936.

Having said all this, Mason’s early Hugh North books are hybrids of a sort - they’re murder mysteries with added espionage elements and espionage backgrounds. As the series progressed the books become more and more true spy stories. And Hugh North is a real spy. A professional spy. He’s a U.S. intelligence officer.

Mason loved exotic settings. In fact it’s hard to think of an exotic locale that North doesn’t visit at some stage during the course of his career.

When reading The Shanghai Bund Murders you have to bear in mind that this was still the Warlord Era in China. Powerful and ruthless warlords had divided the country. Some warlords were ideologically motivated but most were mere opportunists out for power and money. The country was in a constant chaos and wars were continually breaking out.

You also have to remember that this was 1933. The world was not yet divided into rival ideological blocs. In these early Hugh North stories you can’t assume that the Germans or the Japanese will be the bad guys. The bad guys might turn out to be the French. Or the Italians. Or in fact just about any great power.

The Shanghai Bund Murders opens on a British steamer in the Yangtze River. Two warlord armies are fighting it out. Hugh North is in China but at this stage he is not anticipating being involved in any kind of espionage drama or foreign intrigue of any kind.

Two of his fellow passengers attract his attention. One is Sam Steel, an unscrupulous American mercenary in the service of one of the warlords. Steel and North have crossed swords before. The other passenger of interest is Mrs Ruby Braunfeld, a very glamorous Austrian lady. Ruby Braunfeld is a “coaster” - a prostitute plying her trade on the Chinese seaboard. But Ruby Braunfeld is no common prostitute - she is a very high-class very expensive courtesan and she is as charming as she is beautiful. At least four of the men aboard the steamer have already fallen in love with her. She’s obviously going to be worth watching. 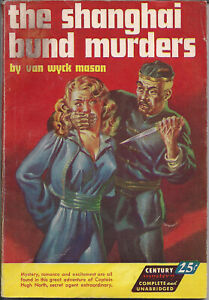 And then one of her admirers commits suicide. Only it’s no suicide. The man was murdered. The motive was not robbery. It could be a crime passionnel. Hugh North however knows something about the man that suggests the possibility that espionage or international intrigue could be involved. The murdered man was British and it’s a British steamer but Hugh North also has reason to believe that the interests of the United States could be involved.

North knows that there’s some plot afoot and that it has something to do with the power struggle between three warlords. Various great powers believe that is in their interests for one of the three to come out on top. North has to make sure that whichever warlord wins is going to be one friendly to American interests, and British interests. Britain and the U.S. are colonial rivals but in this case they have decided that they have sufficient interests in common to persuade them to coöperate.

If North is going to foil this nefarious plot he has to find out who is behind it and why. In order to do that he will have to discover who murdered the man on the steamer, so there’s both a murder mystery and a spy thriller plot strand and both plot strands are inextricably linked.

Sam Steel is a suspect, but so is Ruby Braunfeld and so is an enigmatic English tea merchant, and a Chinese gentleman named Chang, and a mysterious Frenchman. And they’re all equally plausible suspects, and there’s no way of knowing what kinds of powerful interest groups could be pulling the strings behind the scenes.

Hugh North is a combination of action hero and clever detective. He uses the standard investigative methods you’d expect from a great detective but he gets involved in lots of rough-and-tumble action as well.

I’ve previously reviewed several other Hugh North spy novels - The Fort Terror Murders, The Singapore Exile Murders, The Budapest Parade Murders and the truly excellent The Branded Spy Murders. I can’t recommend the early Hugh North thrillers too highly - they have a distinctive flavour of their own, Mason uses his exotic settings not just to provide colour but as integral parts of his plots, they’re fast-paced and exciting and they have just a bit more emotional depth than you might expect. He really was a very fine writer.

The Shanghai Bund Murders is intelligent and provocative and it works as both murder mystery and spy novel. It’s also great fun. Highly recommended.