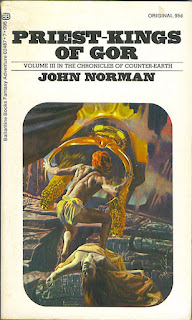 Priest-Kings of Gor, published in 1968, is the third of John Norman’s Gor novels. It differs slightly from the first two books. They had very much the feel of high fantasy with sword & sorcery overtones. Priest-Kings of Gor is more of a science fiction novel.

I’m going to be vague about the plot in order to avoid revealing spoilers for the first two books.

Tarl Cabot is from Earth but he spends much of his time on Gor, which is the Counter-Earth. It’s a planet, almost identical to Earth, within our solar system. Its orbit has made it undetectable from Earth. Gor is also inhabited by humans, identical in every way to ourselves. The differences between the two planets are societal and cultural and those differences are quite profound. Gorean society is hierarchical and divided strictly into castes. Slavery is taken for granted. What made the Gor novels controversial is that on Gor female slavery is taken for granted. Not all the women are slaves, but some are.

In the first two books it was obvious that Tarl Cabot strongly disapproved of many aspects of Gorean society, especially the keeping of women as slaves. In this third book he still disapproves of slavery, but has become more tolerant of Gorean cultural practices.

Now Tarl Cabot is back on Gor and, after the events of the previous book, he wants revenge. He wants to meet the Priest-Kings face to face. More than that, he wants to destroy them.

In this book we find out what the Priest-Kings really are.

Tarl reaches the Sardar, the abode of the Priest-Kings. He meets Parp, who claims to be a Priest-King. Tarl is somewhat sceptical. Tarl finds himself a prisoner and encounters the slave girl Vika. Vika is beautiful and seductive. She might be a slave, but she has a reputation for enslaving men with her beauty. Tarl is not at all sure whether Vika can be trusted.

His third encounter is with one of the Priest-Kings, Misk. 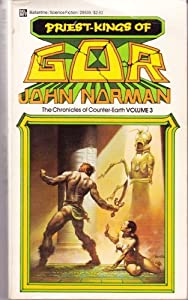 There’s a good deal of action with full-scale battles and a threat to destroy the entire planet.

Tarl is going to have to trust somebody. He thinks he can trust Misk. He’s fairly sure he cannot trust Vika, but he’s not absolutely certain, and he feels vaguely responsible for her. Friendship and love complicate things for Tarl, but friendship and love make us human, an idea which seems obvious to Tarl but puzzling to Misk. His encounter with the Priest-Kings makes humanness suddenly very important to Tarl Cabot.

John Norman is a philosopher and he used the Gor novels as a means of playing around with various philosophical, political, social, cultural and sexual ideas. He claims to be most heavily influenced by Homer, Freud and Nietzsche. Nietzsche is the most obvious influence on the Gor series.

Having a character who divides his time between two radically different societies offers the obvious opportunity to question certain aspects of our own society, and the assumptions behind our social structure. But Norman is not entirely uncritical of Gorean society. He simply offers an alternative social model but whether we, the readers, approve of disapprove is up to us. He seems keen to question, rather than lecture us with his own ideas.

Questions of free will versus compulsion, and conformity versus freedom, and the nature of historical destiny are raised.

If you put aside the sexual aspects (which some people are not going to be able to do) then the Gor books have enough interest to make them worth checking out. The sexual stuff is really a very minor feature of the early Gor novels. Norman is more interested in philosophical questions.

Priest-Kings of Gor might not be to everyone’s tastes but it’s still worth a look.
I’ve reviewed the two earlier Gor books, Tarnsman of Gor and Outlaws of Gor. It might be worth pointing out that these novels absolutely have to be read in sequence.
Posted by dfordoom at 6:34 AM