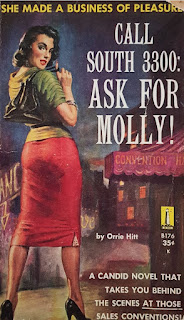 Call South 3300: Ask For Molly! is a 1958 sleaze novel by Orrie Hitt, one of the most prolific and interesting writers that genre produced.

Slade Martin is the sales manager of the All-Channel TV company. They make TV sets. They were one of the most successful companies in the industry but they’ve been on a downward spiral. The general manager, spends all his time at the golf course. Their sets are outdated and look stodgy. Sales are plummeting. Slade knows that he’s the only man in the company who can turn the business around. The first step is to get a big order from a distributor named Kane. The upcoming sales convention will be the opportunity. Slade has an idea how he can get that order. All he needs is the right girl to butter up Kane.

The obvious choice would be the new girl in Accounting, Ann Frank. Ann is a gorgeous classy blonde. Slade is pretty obsessed by her. He’s an inveterate womaniser but this girl is something special.

Slade is sleeping regularly with his secretary Betty but it doesn’t mean anything to him. She has a nice body, that’s all. He’d much rather have Ann.

There are things he doesn’t know about Ann. The first time Ann slept with a boy it was like a whole new world opening up for her. She really really likes sex. In fact she likes it so much that she does it professionally. Ann is a call girl, working for Molly. She only keeps the job at All-Channel because she’s fallen for Slade.

Slade goes ahed with his plan to get that big order from Kane. He doesn’t actually expect her to sleep with Kane, she’s just supposed to string him along, but Ann takes the assignment more seriously than that. There’s a $500 bonus in it for her if she gets that order out of Kane and to Ann there’s no difference between turning tricks for Molly and turning tricks for the All-Channel TV company.

Things get very complicated. Ann and Slade sleep together but to Ann’s horror she feels nothing. She was thinking in terms of marrying him but to her it seems dishonest to marry a man and then pretend to be experiencing sexual bliss when she feels nothing.

Ann doesn’t feel anything when she sleeps with Slade but she feels a whole lot when she sleeps with bad boy Eric. Eric is a creep and a loser and couldn’t hold down a job under any circumstances and Ann understands that but he drives her wild in bed. She has no illusions about him. She plans to turn Eric into a kept man.

But nothing works out the way they’d expected for Ann or Slade, or for Betty, or for Eric.

This is full-on melodrama. It’s melodrama with sleaze but this was 1958 so while there’s plenty of sex going on we don’t get any graphic descriptions of the sex. We don’t get any descriptions of it at all. There’s an atmosphere of sleaze and lust and thwarted passion and twisted love but when the characters enter the bedroom we have to imagine what they might be getting up to.

None of these characters is especially likeable but they’re not unlikeable either. They’re a mixture of good and bad, strength and weakness, cynicism and romantic ideals. And of course this was the 1950s so it’s taken for granted that prostitution is wicked. Having said that Hitt offers us a surprisingly sympathetic portrayal of a call girl. She’s not a mere bad girl.

The novel certainly takes a jaundiced view of business ethics. And kind of dirty trick is justified if it increases sales. The only strategy that All-Channel TV doesn’t consider is making better TV sets. In fact this book deals with two different businesses, respectable businesses like manufacturing TVs and prostitution. Prostitution comes across as being the more honest business. Ann at least takes pride in her work as a call girl. She makes $100 a trick (which in 1958 would have made her a very expensive high-class call girl) but she gives her customers their money’s worth. The only dishonest acts she performs are on behalf of All-Channel TV. Compared to the people running that company Molly (the madam for whom Ann works) is a model of honesty and integrity. Molly never asks Ann to do anything crooked.

The one puzzle that is never solved in this novel is why Ann can’t get aroused when she has sex with a guy who wants to marry her. We can of course offer our own speculations on that subject but Hitt leaves it an unanswered question.

This novel has been published in a paperback edition from Stark House which includes three Beacon Books sleaze classics (the others being N.R. de Mexico’s Marijuana Girl and Elaine Dorian’s Sex Cure).
Posted by dfordoom at 6:29 PM