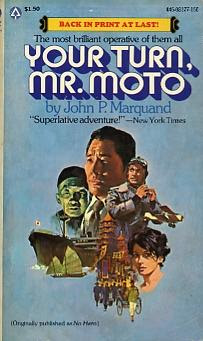 Your Turn, Mr Moto, published in 1936, was the first of John P. Marquand’s Mr Moto novels. Mr Moto is better remembered today from the film series with Peter Lorre as the Japanese master detective.

I’ve only seen one of the Mr Moto films and it’s an engaging mixture of crime and espionage. The Mr Moto of Your Turn, Mr Moto is a rather different character. He’s a spymaster rather than a detective and he’s the bad guy instead of being the hero. He’s also a supporting character, not the central character. Oddly enough that was the way Charlie Chan was also introduced in the first of Earl Derr Biggers’ Charlie Chan novels. In both cases the subsidiary character ended up being the highlight of the book and was so popular with readers that he went on to become the central character in further adventures.

The hero in Your Turn, Mr Moto is Casey Lee, a washed-up alcoholic American flyer stranded in Tokyo when plans for a trans-Pacific flight fall through. He’d hoped the flight would resurrect him as a national hero (he’d been an air ace in the First World War and a noted pioneer aviator in the 20s). Now he’s so embittered that when Japanese spymaster Mr Moto offers him a job he accepts it even though it means betraying his country.

Being a Japanese spy turns out not to be much fun. People keep trying to kill him. On a ship to Shanghai they become convinced he has gained possession of a secret formula that would allow oil fuel to be burnt so efficiently that it would double the cruising ranges of both warships and aircraft, giving whichever country possessed the secret an enormous strategic advantage.

Casey has other problems. He has fallen in love with a glamorous White Russian spy named Sonya. She may be working for one of the major powers, or for the White Russians still hoping to overthrow the Bolsheviks, or for herself. Casey has no idea where her loyalties lie but he’s crazy about her. He’s also having second thoughts about the whole betraying your country thing, plus he’s caught up in a struggle between American, Chinese and Japanese intelligence agencies. The most dangerous person in this game appears to be Mr Moto, an urbane and sophisticated man who deplores unnecessary violence but has a steely determination to get the secret formula for Japan. His courteous and charming exterior hides a razor-sharp mind. While Mr Moto deplores violence he understands the regrettable necessity for it at times.

All Casey Lee understands is that he needs a drink. He’s a flawed and reluctant hero but a hero nonetheless. He muddles through as best as he can.

One thing I get annoyed by these days is people who enjoy this sort of fiction but always feel the need to apologise for the politically incorrect nature of such books. We live in an arrogant age that often forgets that the people of the past were as complex and as intelligent (and sometimes as stupid) as we are. When we assume that the people of the past were all mindless bigots we’re guilty of stereotyping past generations in the same way they get accused of stereotyping other races.

Your Turn, Mr Moto displays a complicated set of attitudes towards the Orient. Of course we’re not even supposed to use that word any more because it conjures up a mood of exoticism, adventure and mystery and we live in an age that has no time for such things. Casey Lee has to struggle to understand the mysterious workings of the Japanese mind, and Mr Moto has to struggle just as hard to understand the equally mysterious workings of the American mind.

Mr Moto might appear to be the bad guy but he’s no villain. Insofar as a spymaster can be an honourable man Mr Moto is an honourable man. He serves his country with intelligence, bravery and education. Casey Lee discovers, much to his own surprise, that he is a patriot as well. Neither of them displays any xenophobic feelings. They respect each other’s abilities (Mr Moto at first underestimates Casey but he soon discovers his error which only increases his respect for the American). On a personal level they like one another.

That’s really the point of the book. Espionage requires deception but it’s not necessarily good guys vs bad guys. Sometimes it’s good guys vs good guys who just happen to be on opposite sides.

This is a very decent espionage thriller. Recommended, especially if you like your spy fiction in exotic locations.
Posted by dfordoom at 8:57 AM