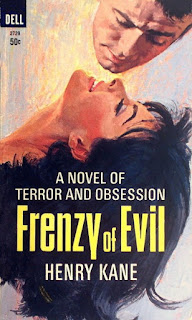 Henry Kane’s Frenzy of Evil was published in 1963. Since it’s been reissued by Black Gat Books, an imprint of Stark House Noir, I assumed this was going to be noir fiction. It is, in a very broad sense, but it’s not in the usual run of noir fiction of its era and it definitely isn’t hardboiled. It has some affinities to the inverted detective story. In this case we know from the start that murder is being planned. The complications are that we don’t know the identity of the intended victim, and there’s more than one person planning murder. And we’re not sure how many intended victims there are.

The book starts with a party for Jonathan Joseph Carson’s first wedding anniversary. Carson is sixty-two. His wife Dolores is twenty-two. Also present is his business partner George Ross, Ross’s wife and their two children, Jeffrey and Debbie. Playwright Frank Haines and his wife Vera and the director of a local theatre group, Gary Mason, are the other guests. These nine people represent hate, love, guilt, rape, adultery, madness and murder with each guest being particularly representative of one of these sins. So far no-one at the party has actually committed murder but that will change soon.

There are multiple romantic triangles established between these various characters. There’s suspicion and jealousy. Some of the jealousy is sexual, but not all of it.

At least two of the guests intend to commit murder. And they intend to get away with it.

The romantic entanglements go on getting messier and there are misunderstandings. Suspicions grow. Some of the suspicions are totally wrong and that will have consequences. 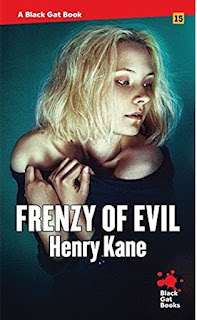 Then the plot twists start to kick in. And they’re nice and nasty with suitable ironic touches. The problem for the protagonists is that they’re operating on the basis of wrong or incomplete information, which leads them to make incorrect assumptions, which in turn leads them to do things that are the opposite of what they should do. They’ll think they’re digging themselves out of a hole when in fact they’re just digging themselves in deeper and deeper.

We can see fairly early on how events are likely to play out, but that makes it more enjoyable watching the author gradually bringing all the pieces together until the likely ending becomes a certainty. It’s a clever, devious and intricate plot in which the characters manipulate themselves without knowing it. What’s fun is that the reader can see the mistakes they’re making and we know how much trouble they’re getting into.

There’s a slight noir feel but whether you will think it’s enough to qualify this as noir fiction depends upon how strictly you define the term. It definitely has some dark cynical moments. And it has some dark characters.

And there’s some scientifically dubious but fun psychiatric stuff which is always a welcome touch.

The book is good enough to make me want to read more of Henry Kane’s work. Incidentally Henry Kane should not be confused with another fine noir writer, Frank Kane.