Desmond Skirrow’s I’m Trying To Give It Up 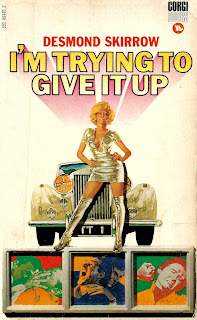 I’m Trying To Give It Up, published in 1968, is the third of Desmond Skirrow’s John Brock thrillers. This particular novel is not quite a spy thriller but since it deals with industrial espionage it’s obviously very closely related to the spy fiction genre.

Desmond Skirrow (1923-1976) was a British advertising executive who turned to writing. He wrote three John Brock novels between 1966 and 1968. He also worked as an illustrator.

John Brock works for an advertising agency. Their biggest client is Tommy Tranter, a tycoon with a finger in every pie. In this novel Brock’s troubles begin with a woman. It’s always the way, isn’t it? The woman is young, petite, cute and blonde. She’s driving a very large white luxury motorcar which she’s just parked and she’s about to get a parking ticket. John Brock firmly believes that a cute blonde should never be subjected to the indignity of a parking ticket. He takes it upon himself to move her car. This causes a misunderstanding and Brock is summoned to Tommy Tranter’s office (which is entirely staffed by gorgeous blondes). He fully expects to be fired.

But he isn’t fired. He’s offered an assignment. It’s a kind of industrial espionage (or in this case counter-espionage) case. Tranter knows that Brock has in the past done cloak-and-dagger work for the Fat Man.

The case involves a man named Weiss who is costing Tranter a lot of money. It has to do with the Product Development department. Which is a bit like MI6, but more efficient.

Brock starts nosing around and gets coshed for his terrible. In fact each time he follows a lead he seems to end up getting hit over the head. He also gets arrested. There’s a London gangster mixed up in the affair. Brock is not sure what part Browning in Product Development plays in the tale. He’s also not sure where Miss Pringle fits in. Miss Pringle is Tranter’s secretary and mistress and she’s a lot of woman, six feet tall and built like an amazon. She has everything a woman should have, only she has more of it than most women.

There’s also a dead body. The man was murdered, more than once.

This is very much an outrageous romp. The plot is impossibly complicated. The characters are all bizarre. The pace is frenetic. It’s not quite an out-and-out spoof but it is very amusing and very tongue-in-cheek. Despite its complexity the plot is quite clever. There are a few far-fetched elements but they remain just within the limits of plausibility.

Brock is the narrator and he’s both cynical and amused. Brock is a tough guy, and ruthless at times. He never wanted to be involved in this case and he keeps telling himself that it’s nothing to do with him. On the other hands he hates his job in advertising so even if the undercover stuff gets him beaten up regularly at least it’s more rewarding than finding ways to persuade people to buy dog food.

Another reason that Brock prefers the cloak-and-dagger stuff is that you meet more dangerous blondes that way. Brock is a bit of a skirt-chaser.

Apart from the spy elements this is a book which mercilessly mocks the world of advertising, and in fact it mocks a great many features of the society of 1968 which thoroughly deserved to be mocked. He gives psychologists a particularly hard time, and does so in a most delightful manner.

There are plenty of wisecracks and there’s some nice mock hardboiled dialogue. “She fell into my arms like a ball into a socket.” Skirrow’s prose has a nicely off-kilter zing to it. Some of the gags are obvious but many are not. He certainly had his own distinctive voice as a spy writer.

Tongue-in-cheek spy novels proliferated during the 60s but this one has a distinctive tone which makes it seem fresh and original. It’s both whimsical and slightly kinky (in a good-natured sort of way). It captures the zeitgeist of the 60s in a particularly vivid manner.

I’m Trying To Give It Up really is fast-moving stylish, slightly sexy, very amusing, very clever fun. If you like your spy thrillers lighthearted and funny then it’s very highly recommended.