Philip Loraine's Day of the Arrow 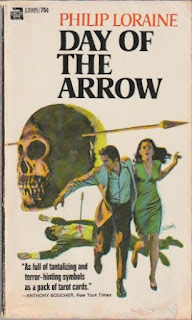 Day of the Arrow by Philip Loraine was the 1964 source novel for the superb and unfairly neglected low-key British horror movie Eye of the Devil (1966).

Robin Estridge (1920-2002) was a British author of suspense novels who wrote under a couple of pseudonyms, including Philip Loraine. He’s one of those many writers who enjoyed some success only to then disappear into almost complete obscurity.

There are some differences between novel and film but the core of the story remains the same.

The novel is told mostly through the eyes of young Scottish painter James Lindsay. It begins when he sees Françoise, the Marquise de Montfaulcon, leaving a Paris hotel with her lover. This surprises him a good deal. Françoise had been so much in love with her husband Philippe and she’s just not the sort of woman to take a lover. Lindsay and Françoise have a bit of a history. Lindsay had hoped to marry her before she chose Philippe. Lindsay is even more surprised when Françoise telephones him. She needs his help. Her husband has told her he is going to die.

Philippe had suffered a slight injury a short while before and Françoise had persuaded the doctor to give him a very thorough checkup. There is absolutely nothing wrong with him physically. But Françoise believes him when he tells her he is about to die.

Lindsay joins Françoise at Bellac, the Montfaulcon estate. He discovers something, mostly just tantalising hints, of the family’s history. They have been lords of Bellac for thirteen centuries. And a truly astonishing number of male heads of the family have met violent deaths in mysterious circumstances. The atmosphere at Bellac is unnaturally silent and a little grim. The vines have failed again.

There’s an odd collection of people there. There’s a young man named Christian. On his first day at Bellac Lindsay sees Christian shoot a dove with a bow and arrow. There’s Philippe’s young cousin Odile, a strange girl reputed to be a witch. But this is the 1960s. There are no witches in the 1960s. That magic trick she performed was clearly just an illusion. What else could it be?

The atmosphere at the chateau is subtly disturbing. Even Philippe prays a lot, which he never did before. Lindsay always assumed that Philippe was a non-believer.

Nobody seems to want to notice that something is strange here. Lindsay’s attempts to find answers almost cost him his life. Lindsay has the evidence he needs to explain the mystery but he can’t put the pieces together, or rather he just cannot except the true explanation.

Philippe and Françoise are much younger in the novel, compared to the movie, and there’s more emphasis on the unhealthiness of their sexual relationship.

The movie is definitely better than the book - its visual style conveys the atmosphere of subtle menace and strangeness far more effectively than Loraine’s prose. In both book and movie the hints of the supernatural are very subtle and very ambiguous (and I’m certainly not going to tell you if there really is anything supernatural) but they’re also handled more effectively in the movie.

The basic story is the same and it’s a pretty good story. There’s a bit more mystery in the book than the movie, but a bit less suspense. It’s a bit hard for me to judge the novel because having seen the movie I knew the nature of the secret of Bellac so the shock revelation was blunted a little for me.

This is a slow-burning story with the sense of menace being rather subtle.

Overall, not as good as the movie but still an interesting occult thriller. Recommended.