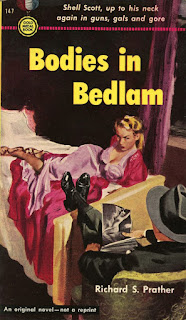 Bodies in Bedlam, published by Gold Medal in 1951, was the second of the Shell Scott private eye mystery thrillers written by Richard S. Prather (1921-2007). He would go on to write many many more.

Private eye Sheldon “Shell” Scott is attending a swanky Hollywood party. Not his usual scene but a while back he did a big favour for the head of Magna Studios which is how he got the invite to the party. It turns out to be quite a night. Some lunkhead annoys him and Shell (who has a bit of a temper) takes a swing at him. Shell meets a doll in a hoop skirt and a silver mask (it’s a costume party). And the lunkhead (a guy named Roger Brane) winds up very very dead, with his throat cut quite spectacularly.

To the police everybody at the party is a possible suspect but obviously a private eye who took a swing at the murder victim shortly before the murder is going to be one of their favoured suspects. Shell is not very happy about that. Captain Samson at the Homicide Squad is an old buddy and he doesn’t believe for a second that Shell is guilty but the officer assigned to the case, Lieutenant Kerrigan, hates Shell’s guts and would love to pin a murder rap on him.

And then Shell finds himself with a new client - the silver-masked doll from the party. The doll, whose name is Hallie, is pretty worried and with good reason - her hoop skirt and silver mask were found next to Brane’s body. Shell is sure that Hallie is innocent because she’s really cute and really friendly and he likes her.

Roger Brane is (or was) a painter, and a pretty good one. He had plenty of money but the money din’t come from his painting. Shell figures it might have come from blackmail, and that his speciality may have been blackmailing Hollywood actresses. There are at least four actresses who were at that party who may have been victims of Brane’s blackmailing.

What Shell can’t quite figure out is where Garvey Mace fits into all this. Mace is a businessman, the sort of businessman whose business interests are not exactly strictly legal. In fact he’s a racketeer. He’s not the sort of man who would have anything to do with artists but Mace seems to be really interested in this case.

This is not quite hardboiled fiction. You could call it medium-boiled. There’s plenty of wry humour. It’s moderately violent and quite sexy.

Prather has quite a prose style and a gift for sparkling dialogue. The tone is cheeky and irreverent and generally fairly light. The emphasis is on entertainment. There’s none of the grim pessimism or misanthropy that you find in some hardboiled fiction.

Shell Scott had been a Marine during the war and he didn’t like it. He likes being a private detective. For one thing you get to meet lots of interesting women. Shell likes women a lot. And some of the women he meets are real friendly. Shell likes that.

Shell can handle himself pretty well and he can be a tough guy when it’s necessary but he doesn’t enjoy brutalising people. He’s no sadist. He has occasional outbursts of anger but he’s not a guy who likes to go looking for trouble. If trouble finds him then he deals with it. Mostly he has a cheerful outlook. He’s definitely not a psychologically tortured hero. And he likes fish. Tropical fish. He has tropical fish in his home and in his office. He’s not a Mike Hammer-style private eye. He’s also not a Philip Marlowe-style private eye. He’s not introspective. He just wants to make a living and enjoy life. He’s a very likeable hero. He also drives a canary-yellow ’41 Cadillac convertible, which he seems a bit embarrassed by. He’s not the world’s greatest detective and he doesn’t have unrealistic ideas about his own abilities.

There are some good action moments, especially the fight in the car.

It’s all wildly politically incorrect of course, which adds to the fun.

The details of the blackmail racket are very clever and original. Hollywood doesn’t just provide a glamorous background - the movie industry plays a key role in the plot.

Bodies in Bedlam is fast-paced fun with a nice mix of action and humour. Highly recommended.
Posted by dfordoom at 12:08 AM