Carter Brown's No Harp for My Angel 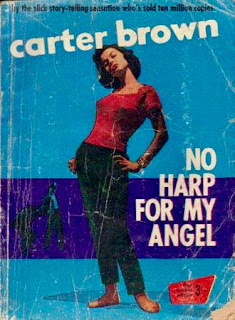 Alan Yates (1923-1985) was an English-born Australian writer of crime fiction under the name Carter Brown and he was one of the most prolific authors of all time. He wrote round 300 novels. In his lifetime he was also one of the world’s most successful novelists, selling around 120 million books. He’s one of those writers who enjoys immense success followed by almost complete obscurity. His best-known series character was Lieutenant Al Wheeler, a homicide cop in LA. No Harp for My Angel, published in 1956, is one of the earlier Al Wheeler mysteries.

Al Wheeler is enjoying his vacation in Florida. Especially when he meets cute green-eyed redhead Julie Adams. Julie warns him that her boyfriend, a guy named Johnny Lynch, is really big, really mean and really jealous. To Al that just makes Julie seem even more desirable. He’s just that kind of guy.

Of course this is before Al meets Zero. Zero is Lynch’s henchman. Julie had described Zero to him as being about seven feet tall and built like a gorilla. She wasn’t exaggerating. Al wakes up in the local police headquarters to discover that he’s about to be booked for drunk driving and crashing a car into plate-glass window. The last thing Al can remember is Zero picking him up like he was a kitten. Lieutenant Ben Jordan (an old buddy) offers Al a proposal. He wants Al to pose as a big noise Chicago racketeer and he wants Al to annoy Lynch so that Lynch will do something stupid. Al thinks this is a terrible idea but Ben persuades him by threatening to book him on all those charges outstanding from the car incident. Never trust an old buddy, especially when the old buddy is a cop.

Lieutenant Jordan is worried about those missing dames. Four of them. All nice girls from nice families. Rich families. Girls disappear from time to time, but not these kinds of girls. And all four girls had been gambling in Johnny Lynch’s club, the Paradise. It’s a thin connection but it’s the only lead Jordan has, plus he’s pretty curious about Lynch and about all the hoodlums in town are scared of him. Nobody had even heard of Lynch until  few months earlier.

Al certainly gets Lynch’s attention. That’s good. He also attracts the attention of a Syndicate guy from Chicago. That’s maybe not so good. Al definitely has no trouble getting the attention of women. He has Julie throwing herself at him and he has Dawn doing the same thing. Dawn is the best friend of one of the missing girls and she’s been persuaded by Al and Lieutenant Jordan to act as a decoy.

Having Lynch and maybe the Mob wanting to kill him is troublesome enough but an even bigger problem is trying to make sure Julie and Dawn don’t kill each other. Specially after Dawn ties up Julie with her own girdle and a bedsheet. These two girls don’t like other girls messing with their man, and they both consider Al to be their man.

As you may have gathered Al Wheeler likes women. He likes them a lot. He also likes booze. He like women so much you might wonder how he finds time for anything else.

I’d describe this book as Hardboiled Lite. It has a hard-boiled flavour but without the grim overtly pessimistic edge. There’s a slight tongue-in-cheek flavour as well, enough to disqualify it as noir fiction. It’s fast-moving fun. There’s some violence but nothing graphic.

Apart from his early encounter with Zero most of the violence Al encounters is at the hands of Dawn (who slugs him after discovering Julie in his bedroom). Oh, and Julie tries to drown him. These women are hard to handle. Al doesn’t hit women. Well, OK, he does, but only when he has to. I mean if a dame is about to walk into your bedroom and you’v got another dame stashed in the what can you do? You knock her unconscious. But gently.

The tongue-in-cheek tinge is not enough to detract from an exciting tale of mystery and suspense but it does give the novel the feel of a hardboiled romp. I mentioned in an earlier Carter Brown review that he reminds me just a little of Peter Cheyney’s Lemmy Caution books (such as Never a Dull Moment and I’ll Say She Does!) and I stand by that. The emphasis is on fun, with plenty of guns, dames and wisecracks.

No Harp for My Angel might be pulpy trash but it’s incredibly entertaining. Highly recommended.
Posted by dfordoom at 9:30 AM