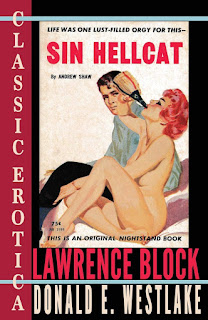 Before making names for themselves as crime writers Lawrence Block and Donald E. Westlake kept body and soul together by churning out lurid paperback erotica for published like Midwood Books and Nightstand Books. They wrote countless such books including five in collaboration, the third of which was Sin Hellcat, published by Nightstand Books in 1962. For what it’s worth it was Block’s favourite of the five collaborations.

The sin hellcat of the title is Jodi but much of the book is taken up by the reminiscences of the narrator, Harvey. He’s a successful advertising executive, very unhappily married and not liking his job very much. Not that he had ever had any real ambitions, except to be a success. He didn’t care what he did, as long as he was a success. At the time he first met Jodi, twelve years earlier, he was majoring in English at college. Jodi wasn’t his first girlfriend but she was the who had the most impact on him. Maybe he should have married her but he didn’t love her and she didn’t love him and they thought that that mattered.

Jodi is now a success as well. She makes twelve thousand a year (a vast amount of money in 1962) as a high-class whore. Now their paths have crossed again and he remembers their long ago affair, and he remembers his other affairs. All of which now seem much more attractive to him than his marriage. It’s clear that his marriage is both loveless and sexless.

Now he’s run into Jodi again and (after a night of passion together) she has a proposition for him. It sounds easy, illegal, lucrative and fun and it certainly appeals to him more than going home to his wife. All he and Jodi have to do is take a package to Brazil. That’s all. The package turns out to be something they had not anticipated. No, it’s not drugs or diamonds or guns or military secrets or anything like that. It’s not even exactly immoral, but it is a very awkward package.

Harvey Christopher is an odd character. He’s been motivated by selfishness but somehow it hasn’t worked out. He’s got the things he thought he wanted but they didn’t make him happy and the things that might have made him happy he didn’t manage to hang on to. Like Jodi. He just can’t forget Jodi. It’s not like he’s still in love with her because he never was in love with her, but he was happy with her. Now she’s a whore but at least that’s an honest living compared to advertising.

Harvey isn’t really a bad guy. He just hasn’t quite figured life out. He’s found out what he doesn’t want. He doesn’t want the life he’s got. But he doesn’t know what to do about it. Jodi isn’t quite the Whore with a Heart of Gold but she’s not a bad person either. She’s in much the same position as Harvey. She makes a lot of money as a prostitute and she has a really nice apartment in Manhattan and she’s not unhappy but she isn’t really happy either. Life and love and sex have turned out to be pretty complicated for both of them.

These sorts of books were of course little more than a succession of sexual escapades. By today’s standards they’re incredibly tame. That’s what makes them interesting - the authors had to describe the sexual encounters in such a way as to leave the reader in no doubt as to what was going on but without being able to be too graphic. It was a balancing act. They had to provide enough detail for the reader to know exactly what kinds of sexual acts were being described, but without going into too much detail. Which makes them naughty fun rather than anything even remotely approximating to pornography.

They’re even more fun when, as is the case with this novel, the authors could actually write. Westlake and Block have the knack of generating some sexual heat but without enough actual fire that might get the publishers shut down or arrested. It’s the art of titillation and these two writers do it well. It’s like old-school burlesque where you always think the girls are going to show you a great deal and they never show you quite as much as you expect, but you enjoy the show anyway. It’s just graphic enough to have been considered very racy indeed by the standards of 1962.

They also manage to provide a certain amount of wit and amusement.

It’s all done in a way that is a lot less crass than most of what you’ll encounter in modern mainstream Hollywood movies or mainstream literature. It’s both naughty and innocent and it’s cheerfully and playfully trashy. And trashy and sleazy it most certainly is, but the trash of 60 years ago is a lot more enticing than the trash of today. If you like vintage trash sleaze fiction you could do a lot worse. Sin Hellcat is recommended, if this is your sort of thing
Posted by dfordoom at 1:36 AM