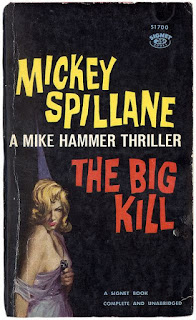 The Big Kill is the fifth of Mickey Spillane’s Mike Hammer novels. It was published in 1951.

Things have become so bad in New York City that a guy like Mike Hammer can’t even walk into a sleazy bar to have a quiet drink without ending up being a witness to a murder. This is a murder that really gets to Hammer. This guy walks into the bar with a little kid, only about a year old. The guy starts crying (and Mike finds that pretty disturbing) and then walks out the door, leaving the kid behind, and gets bumped off. Mike has the feeling that the guy knew he was about to die.

Seeing a kid made into an orphan in front of his eyes does something to Mike. He even volunteers to look after the child until the proper agencies can be contacted. Then Mike sets out to find the killer.

At first it seems like it’s a case of the consequences of a burglary gone wrong. The problem with that is that the dead man had been a professional safe-cracker but he had gone straight and everybody who knew the guy assures Mike that he truly was a reformed character. Hammer is inclined to believe them, but the guy definitely did rob the apartment of one-time minor movie star Marsha Lee. But why?

Captain Pat Chambers of the Homicide Squad has a theory but Mike thinks there’s something much bigger behind it.

This is classic Spillane, rough and tough and as hard-boiled as you could wish. And, as is so often the case in the Mike Hammer stories, it’s Hammer’s sensitive side that drives him on. He just keeps thinking about that orphaned kid. It’s Hammer’s sensitive side that drives him even when he’s pulling the trigger of his .45 and blowing away hoodlums. Hammer is ruthless but he has a highly developed sense of right and wrong.

He also has a tendency to take cases personally. Mostly he’s happy for the criminal justice system to take its course but there are times when he’d much prefer to be judge, jury and executioner. And in this case he really wants to pull the trigger on the guy that killed that kid’s father.

Spillane wrote the Mike Hammer books in two batches. Six were written between 1947 and 1952. After a ten-year break Spillane returned to the series and wrote seven more books. Reading one of the later books recently (The Body Lovers, from 1967) I had the impression that Mike Hammer had mellowed somewhat. Reading The Big Kill confirms that impression. The later Hammer is still a tough guy but he doesn’t seem to take quite the same pleasure from inflicting physical violence as he did in earlier years. It actually makes sense. It’s made clear in The Body Lovers that this really is an older Mike Hammer. Maybe a bit wiser and a bit sadder.

Mike’s skirt-chasing also seems more frenetic in The Big Kill than in The Body Lovers.

Spillane was definitely in the groove when he wrote The Big Kill. It has all the classic Spillane touches. Spillane is not an author for everyone but if you like his stuff then this one is highly recommended.
I've also reviewed several earlier Mike Hammer novels, including I, The Jury.
Posted by dfordoom at 10:33 PM