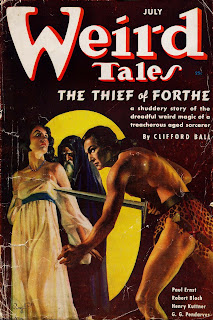 Clifford Ball (1896-1947) was an American writer who had half a dozen stories published in Weird Tales between 1937 and 1941 after which he vanished into obscurity. The reason he matters is that after the death of Robert E. Howard in 1936 Ball was one of the first writers to pick up the sword & sorcery torch that Howard had dropped. Ball’s first three stories fall firmly within the sword & sorcery genre.

The first story, Duar the Accursed, was published in Weird Tales in May 1937.

Duar, a barbarian warrior who has been in his time a king and a pirate, is brought in chains before Queen Nione of Ygoth. Later, in her dungeon, an apparition of light appears to him, reminding him of things he has forgotten. It seems that he has forgotten much. The apparition, in the shape of a beautiful woman, commands him to go to the Black Tower of Goth wherein he will find the Rose of Gaon. The Black Tower is where the worst of criminals are sent, to await an unknown but doubtless horrible fate.

Duar would seem to be a man with a destiny, if only he could remember what that destiny might be. What he does know is that he was once a king and he wants to be a king again.  He would also like a queen to possess and Nione is beautiful and she is definitely a queen. Whether Duar discovers his destiny, whether he gets to possess Nione and what the secret of the Rose of Gaon might be - you’ll have to read the story yourself.

This is a decent enough sword & sorcery tale. Obviously it lacks the driving energy of Robert E. Howard’s stories, it lacks the decadent strangeness of Clark Ashton Smith’s tales and the imagination of C. L. Moore’s. It’s something of a by-the-numbers attempt at the genre but it’s enjoyable. And Duar has the potential to be an interesting hero. For sword & sorcery fans it’s worth a look.

The Thief of Forthe appeared in the July 1937 issue of Weird Tales. The magician Karlk and the thief Rald have hatched a plan to steal something that will rock the kingdom of Forthe to its foundations - they intend to steal nothing less than the kingdom itself. Or at least to steal the means whereby to gain the kingdom. For Karlk it will mean being the power behind the throne. For Rald it will mean the throne itself. And he might, if he’s lucky, even get to possess the king’s sister as well. The Lady Thrine is both beautiful and spirited. To possess her would be every bit as pleasant as to possess the kingdom.

When you have both a beautiful woman and a wizard to deal with things are apt to become a mite unpredictable.

Rald will also have cause to wonder if some of the more terrible rumours about Karlk might be true.

This story confirms the impression made by Duar the Accursed. Ball does not attempt anything in the way of full-blooded action scenes, which may have been a wise decision. To do so would have meant trying to match Robert E. Howard’s mastery of such scenes and that’s something very few writers have been able to do. Compared to Howard the eroticism is not quite there either. Having said that I have to add that it’s another perfectly competent sword & sorcery adventure.

The Goddess Awakes, published in Weird Tales in February 1938, is the third instalment of the adventures of thief-adventurer Rald. Rald and his comrade Thwaine have been serving the king of Livia as mercenaries but now the king’s army has been destroyed and the survivors, including Rald and Thwaine, are being hunted by the victors. They find themselves captured by an army of women, in a land ruled by women.

Queen Cene rules here, or does she actually rule? Is there another power here? Perhaps a supernatural power and perhaps not, but certainly malevolent. Is it some hitherto unknown goddess? Rald and Thwaine do not yet know what fate they are about to confront in the arena in this strange queendom.

This is the strongest of the three stories, with genuine menace and weirdness. The nature of the goddess is a clever idea. There’s also real tension.

While Ball might not have been another Robert E. Howard he did have talent. The potential was certainly there, each story is better than the preceding one, and overall these three tales (especially The Goddess Awakes) are actually pretty good. It’s a great pity that this author’s career was so short-lived.

Clifford’s Ball half-dozen published stories, including these three sword & sorcery tale, have been reprinted by DMR Books as The Thief of Forthe and Other Stories.
Posted by dfordoom at 12:06 AM