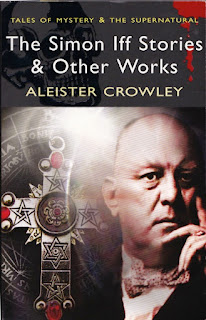 I’ve never made any secret of my love of occult detective stories. They’re one of my favourite genres. Aleister Crowley’s Simon Iff stories (collected in Wordsworth Editions’ The Simon Iff Stories and Other Works and written during the second decade of the 20th century) certainly belong to this genre but they do have a distinctive flavour all their own.

Simon Iff is an old man. He’s in his 80s but he has the vigour of a man half his age. He also has a characteristically ironic and eccentric view of the world. Simon Iff is the man Crowley hoped to be when he reached that age - he is essentially an idealised self-portrait of the artist as a grand old man.

Among occult or psychic detective tales the Simon Iff stories are rather unique. There are no supernatural elements whatsoever. Not even paranormal phenomena. The cases that Simon Iff investigates are all very human crimes. What qualifies these stories as examples of occult detective stories is the unique methods of Crowley’s detective. Simon Iff is a magus and he uses Crowley’s philosophy (or religion if you prefer) as the basis for his understanding of the world, and this understanding of the world is the key to his methods. Simon Iff also has a profound knowledge of human psychology although his ideas on what makes people tick would appear more than a little eccentric to most people.

Simon Iff believes that in order to solve a crime it is necessary to study the minds of the people involved. Minds are more important than facts. He has no interest in crawling about on the floor looking for clues. He is contemptuous of alibis and bloodstains. He does not even deem it necessary to visit the scene of the crime. All he needs is sufficient information on the persons involved to understand the workings of their minds.

This unusual method necessarily means that the structure of these stories is very different from that of conventional detective stories. There is no gradual uncovering of the sequence of events and there is no gradual accumulation of clues.

The greatest strength of these stories is Crowley’s writing. He could be a very amusing writer indeed and these tales give him the opportunity to display his talent for light-hearted tongue-in-cheek storytelling. The tone is occasionally grim but is more often satirical and even whimsical, or willfully but amusingly perverse.

Many of the stories were written during Crowley’s residence in the United States and have an American setting. Simon Iff’s view of the US (which was undoubtedly identical to Crowley’s) is certainly eccentric.

Crowley had a tendency to magnify his own importance and Simon Iff can be seen as a kind of wish-fulfillment fantasy. Iff is a celebrity detective who wines and dines with the high and the mighty.

The major weakness though is that Crowley uses these stories to push his own philosophy, and it’s a fairly silly philosophy. Simon Iff’s continual trashing of conventional morality eventually gets tiresome and predictable. Like Crowley himself the detective is to a large extent contrarian for the sake of being contrarian. He also espouses some remarkably foolish and naïve notions about other cultures, all of which are assumed to be superior to wicked western civilisation.

Crowley buffs will of course enjoy this collection.

The Simon Iff stories (and this collection includes all twenty-three) are unusual but they are  fairly entertaining although Crowley is best enjoyed in small doses. Definitely off-beat and worth a look.
Posted by dfordoom at 5:28 AM