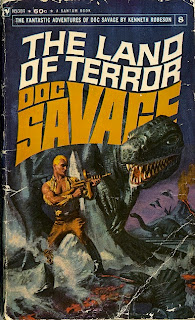 Doc Savage first saw the light of day in the early 1930s and appeared in hundreds of books as well as various other media. Most appeared under the name Kenneth Robeson but the main writer was Lester Dent, although other writers contributed to the series. Land of Terror, published in 1933, was one of the early titles written by Dent. In this adventure Doc Savage gets to battle dinosaurs!

A famous scientist, who happens to be a friend of Doc Savage’s, is murdered. All that is left of his body is his right arm. Doc realises immediately that he is dealing with some fiendish new weapon. His hunt for the killers, and for the diabolical criminal mastermind behind them, will lead him to an island near New Zealand. The island is a gigantic volcano with an immense crater. Inside the crater is a lost world of dinosaurs!

There’s all the action you expect from this pulp adventure series, with an alarmingly high body count. Doc and his team of five hand-picked assistants will have their work cut out for them. Their enemies are dangerous enough but this time they also have to avoid becoming dinner for a hungry tyrannosaurus and fend off attacks from flocks of pterodactyls.

If dinosaurs aren’t even for you there’s also a pirate ship that serves as the bad guys’ headquarters. This naturally affords the opportunity for Doc to demonstrate his prowess with a cutlass.

The dinosaurs are actually a good idea. Doc is such a formidable adversary that there is a danger that you could end up thinking the villains don’t stand a chance, but at least the dinosaurs even the odds a bit.

Each of his assistants is an expert in some field, although Doc’s own knowledge embraces every field of science and medicine that can be imagined. Doc is of course also a physical marvel, a man whose athletic abilities defy belief. Doc is not quite a superhero, in the sense that all of his powers are in theory quite natural. They are simply developed to an extraordinary extent. In fact they’re developed to an extent that stretches credibility but that’s all pat of the fun of pulp fiction.

The style is as pulpy as you could wish.

It’s all tremendous fun. If you haven’t discovered Doc Savage then you’ve missed one of the classic pulp heroes.
Posted by dfordoom at 5:53 PM