The Footsteps at the Lock 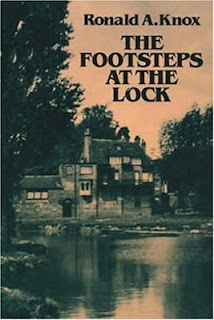 The Footsteps at the Lock, published in 1928, was the second of Ronald A. Knox’s Miles Bredon mystery novels.

Monsignor Ronald Arbuthnott Knox (1888-1957) was a Catholic priest who wrote detective stories. He is perhaps best-known to fans of golden age detective fiction as the man who in 1929 codified the Ten Commandments of Detective Fiction. He was a founding member of the Detection Club.

The Footsteps at the Lock is a classic golden age mystery with a delightfully convoluted plot.

Derek and Nigel Nigel Burtell are cousins and they dislike each other intensely. On his twenty-fifth birthday Derek stands to inherit a considerable fortune. If he dies before the age of twenty-five the fortune will instead pass to Nigel. The problem is that Derek’s chances of reaching that age are rather poor, due to his drinking and drug-taking habits. Derek is deeply in debt and his creditors, realising that they will get nothing if he dies before turning twenty-five, have insisted he insure his life. The only insurance company that will take the risk is the Indescribable Insurance Company.

We will discover later that there is another potential inheritance that may have a bearing on the case.

The two cousins set off on a canoeing trip on the Thames. After passing through the Shipcote Lock Nigel leaves the river to travel to Oxford for his finals. He was supposed to rejoin Derek at the Gudgeon Inn (located near the Eaton Bridge) a couple of miles downstream. Nigel arrives at the inn and waits. When Derek still has not appeared several hours after their proposed rendezvous Nigel raises the alarm.

The Indescribable Insurance Company feels that the circumstances are suspicious enough to call in the services of Miles Bredon. Bredon is a private detective who works exclusively for the company. Miles quickly establishes that something suspicious has indeed happened, but as to what it is - that is not clear at all.

Miles Bredon will spend much of the next few days in a canoe, testing out various theories in search of an answer to the puzzle.

Miles is an engaging detective hero. He is a good detective but he dislikes work so the job with the Indescribable Insurance Company suits him. Most of the time he has virtually nothing to do. Miles is naturally indolent but once he’s on the scent he is remarkably tenacious. Miles has a very good relationship with Detective-Inspector Leyland, the Scotland Yard man called in by the county police to try to make sense of the mysterious events at Shipcote Lock. Miles is one of those private detectives who is happy to work with the police. He doesn’t mind who gets the credit for solving the case. All his employer needs to know is whether Derek Burtell is really dead or not. That is the end of their interest in the case, and it is the end of Miles’ interest. But of course, in order to establish Derek’s death (or continued life), Miles will have to solve the case anyway.

Devotees of the golden age detective story should find themselves very satisfied by The Footsteps at the Lock. Recommended.
Posted by dfordoom at 9:46 PM