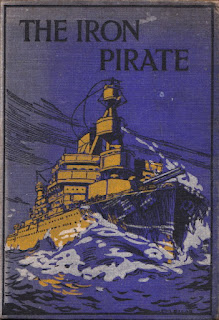 Max Pemberton’s adventure novel The Iron Pirate was a major bestseller in the 1890s. It is a pirate tale, but an unconventional one.

Sir Max Pemberton (1863-1950) was a journalist and novelist and was a noted dandy. He wrote crime fiction as well as tales of adventure and was for a time the editor of a boys’ magazine.

The novel starts with a chance meeting, a meeting that is perhaps not as random as it seems. Mark Strong is a wealthy young man, or at least he had been a wealthy young man. At the age of 25 he has run through most of his inheritance. He meets a man named Martin Hall. Hall appears to be something of a fool but appearances are deceptive. Hall is no fool, although he is certainly engaged in a very risky undertaking. He believes he is close to success but if he fails it will mean his death. He leaves some papers with Mark, with instructions to open them in the event of Hall’s death. He also asks Mark to meet him again in three days in Plymouth.

Most of what remains of Mark’s fortune is tied up in his yacht, the Celsis. He sets out in the yacht for Plymouth but what he finds, under horrifying circumstances, is Hall’s body.

The manuscript Hall had left with him tells a bizarre story. Hall had been a spy engaged in naval intelligence. At a shipyard in Italy he spotted a very striking ship. His instincts tell him he has uncovered something big, and his instincts are correct. The unnamed ship (we never do discover its name) is owned by an American millionaire.

That a private individual should own a warship is unusual enough but this is a very extraordinary warship indeed. It’s immensely well-armoured due to its construction from a very rare and expensive alloy, it’s well-armed, but most significantly it is powered by gas rather than coal. And it is fast. In fact it’s the fastest warship afloat, and being powered by gas it is much less dependent on coaling stations than the average warship of the 1890s. Why would a millionaire have such a ship built for him? The reason is simple. The owner, Captain Black, is a pirate.

The great days of piracy are over, but Captain Black believes he can bring them back. No warship can catch his ship.

Mark Strong now takes on Martin Hall’s mission, to track Captain Black and his mysterious ship to their lair. When he finds the pirate he discovers that things are not as straightforward as he’d thought.

This is Victorian adventure at its best, with a dash of science fiction as well - there’s some wonderful techno-babble about Captain Black’s ship (which will delight steampunk fans). There’s also a surprising level of violence, some of it rather grisly.

Captain Black is the villain but he becomes a sort of anti-hero. Even Mark Strong, repelled though he is by the cruelty and casual violence of the pirates, is strangely drawn to Captain Black. And of course the pirate has a secret that explains his strange choice of career. You might expect the villain in a Victorian adventure tale to be a simplistic villain straight out of melodrama but that’s not the case here.

There’s plenty of action, there are sea battles, there’s everything you could want in an adventure novel. Highly entertaining. Recommended.
Posted by dfordoom at 12:29 AM