The Shadow on the Blind and Other Stories 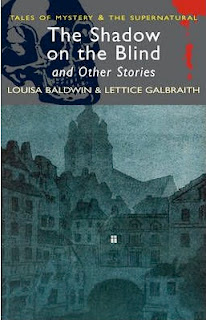 Louisa Baldwin (1845-1925) was the mother of Stanley Baldwin, who served as Prime Minister of Britain on three occasions during the 1920s and 1930s. She was also Rudyard Kipling’s aunt. Louisa Baldwin was a novelist and poet.

Her collection is a fairly routine set of ghost stories. Some are quite good, some are mediocre, and none reach any great heights. The Weird of the Walfords, The Uncanny Bairn and Many Waters Cannot Quench Love are perhaps the strongest stories. Most of her tales are fairly predictable although quite competently written and reasonably atmospheric. For those who simply cannot get enough Victorian ghost stories they provide adequate if not thrilling entertainment.

Lettice Galbraith is a rather mysterious figure. She wrote a novel and a number of short stories during the mid-1890s and then promptly disappeared from the literary stage.

Galbraith’s stories are to my mind somewhat more interesting than Louisa Baldwin’s. They’re also mostly fairly conventional but on occasions they offer us something slightly more interesting.

The Case of Lady Lukestan hinges on the vexed legal question - can a jury be persuaded to accept evidence from a dead man? This is an exceptionally interesting story, the strongest in the whole book. In The Ghost in the Chair a mining company is saved from ruin by a man who is already dead.

Revenge is the theme that seems to run through most of her stories. Her ghosts are usually seeking some kind of redress for a wrong done to them. In some cases they wreak their revenge on the guilty; in others it is the innocent who suffer.

The Trainer’s Ghost and Other Stories is a serviceable if short collection that fans of the ghost story will find it worthwhile to seek out.

The book as a whole is not one of Wordsworth’s best offerings but it is, like all their books, very cheaply priced and there are a few stories here that are probably enough to justify the purchase price.
Posted by dfordoom at 5:49 AM