The Duke of York’s Steps 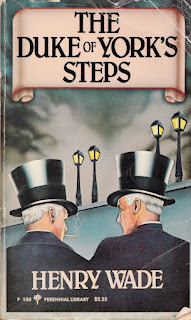 Henry Wade’s The Duke of York’s Steps was published in 1929 and it’s a fine example of the golden age detective tale.

A wealthy banker, Sir Garth Fratten, dies suddenly on The Duke of York’s Steps in London. Sir Garth had an aneurism and his death comes as no surprise to his doctor. Sir Garth had had a very minor accident (a man had jostled him) and his doctor is satisfied that even a fairly mild shock such as that would have been more than enough to cause the aneurism to burst. He unhesitatingly makes out the death certificate stating that Sir Garth died of natural causes. There are no suspicious circumstances and it all seems so straightforward that there is not even an inquest.

Despite this Fratten’s daughter Inez is not entirely satisfied. She places an advertisement in the London newspapers, seeing the man who had stumbled into her father shortly before his death. The advertisement comes to the attention of the Assistant Commissioner in charge of the Criminal Investigation Department at Scotland Yard. He decides the matter should be looked into, purely as a matter of routine. He is in fact quite convinced that there is no question of foul play in Fratten’s death, but he assigns Inspector John Poole to make a few inquiries.

Poole soon realises that there is at least one person with a very strong motive for murdering Sir Garth. There are also some financial affairs connected with the deceased banker that seem worth looking into. Poole becomes more and more convinced that this is a case of murder, but the circumstances of Fratten’s death seem to make that impossible. Nonetheless Poole is now very interested.

It becomes apparent that there are in fact several people with strong motives. But Poole still cannot discover any possible means by which the banker could have been murdered.

Needless to say Poole does eventually uncover the evidence he needs. His investigation leads him into a world of high finance where things are not as they seem, and a sordid world in which rich young men make fools of themselves over chorus girls.

This novel boasts a very ingenious murder method indeed. This is in fact one of the strongest points in the book’s favour.

Inspector Poole is something of an intellectual, at least by the standards of official police detectives, having been educated at Oxford. After university he had been called to the bar and spent a year practising as a barrister before joining the Metropolitan Police. Poole is very ambitious, his aim being nothing less than to become Assistant Commissioner in charge of the Criminal Investigation Department at Scotland Yard. Such a position requires broader experience than would usually be gained by a straightforward police career. His immediate superior is rather sceptical of Poole’s abilities.

Despite his Oxford education Poole is not in the style of aristocratic detectives like Lord Peter Wimsey. His father was a country doctor and he comes across as a reasonably straightforward sort of person, educated but not one to parade his education to any degree. He’s a likeable and interesting enough detective hero.

Henry Wade was the pseudonym adopted by Sir Henry Aubrey-Fletcher, 6th Baronet (1887-1969). He wrote quite a few mysteries between the late 1920s and the late 1950s including seven Inspector Poole novels and was a founding member of the Detection Club.

The Duke of York’s Steps is a classic golden age detective story. The plot stretches credibility but outrageously intricate plotting part is part of the charm of this school of crime fiction. Highly entertaining and recommended.
Posted by dfordoom at 7:49 PM