The Prisoner in the Opal 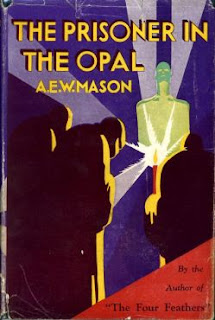 A. E. W. Mason (1865-1948) is best remembered today as the author of the classic adventure novel The Four Feathers. He also wrote five detective novels featuring Inspector Hanuad of the Sûreté. The Prisoner in the Opal was the third in this series, appearing in 1928, and is probably the best-known.

It’s an interesting combination of the golden age detective story and the occult. The occult elements take quite a while to become apparent but the fact that the most widely available paperback edition is part of Dennis Wheatley’s Library of the Occult is a giveaway that the occult will indeed figure in the story.

Mr Julius Ricardo is a middle-aged retired tea-merchant whose great passion in life is wine. Every year he makes a pilgrimage to the Médoc region around Bordeaux at vintage time. Mr Ricardo does have one other unexpected interest - crime. This is a result of his unlikely friendship with the great Inspector Hanuad of the Sûreté. He is in effect Hanau’s Watson.

When Mr Ricardo meets Joyce Whipple, a beautiful and fascinating young American woman, he is both enchanted and intrigued. Joyce has received a latter from her friend Diana Tasborough and has become convinced that Diana is threatened by a great evil. She cannot explain why, since there is nothing in the letter to suggest such an assumption,  but she has received an impression that Diana is surrounded by evil forces. Joyce persuades Mr Ricardo to change his plans slightly and to stay at the Château Suvlac during the vintage time. Diana and her friends will also be there.

Mr Ricardo is not a man given to a belief in superstition or the supernatural but Joyce Whipple’s distress is so palpable that he cannot avoid feeling that her instinct may be right.  Of course it’s also possible that Mr Ricardo is not inclined to disbelieve any story coming from such a charming young lady.

On his arrival in the Médoc Mr Ricardo runs into his old friend Inspector Hanaud and Hanaud’s presence convinces him that something sinister is indeed afoot. The atmosphere at the Château Suvlac is certainly somewhat odd and strained. The young Mrs Evelyn Devenish seems to feel an extraordinary hatred for Joyce Whipple. Diana Tasborough is behaving in an uncharacteristically distracted manner, and her aunt Mrs Tasborough seems more commanding than usual. The estate manager, Robin Webster, seems to be behaving in a slightly odd manner. The Château’s near neighbour, the Vicomte Cassandre de Mirandol, is most certainly sinister. And the Abbé Fauriel’s behaviour gives rise to suspicious speculations. There is also, in the background, Diana’s young man Bryce Carter, whom she has apparently recently jilted.

So far no crime has occurred but that will soon change. A murder and a disappearance will  soon provide a major challenge for Inspector Hanuad. And the dead body has had its right hand hacked off!

The relationship between Mr Ricardo and Inspector Hanuad provides plenty of opportunity for amusement. Hanaud is a brilliant man but he does things to the English language that cause Mr Ricardo a great deal of pain. Mr Ricardo is convinced that although Inspector Hanuad is a good chap and quite capable in his own way he could not possibly solve even the most routine of crimes with his, Mr Ricardo’s, help. This affords Inspector Hanuad with a good deal of good-natured amusement.

The solution to the crime is of course complex and convoluted with lots of sinister but initially very subtle hints of the strange and the occult. A vast occult conspiracy is of course involved, but who are the prime movers and who are the innocent dupes?

French detectives were quite the fashion at the time, with John Dickson Carr’s Inspector Henri Bencolin being a notable example. They afforded crime writers with an opportunity to make use of exotic and fashionable locations. Hanaud belongs to the class of genius detectives who rely on both inspiration and thorough detective work.

Mason’s style is witty and entertaining. There are plenty of colourful touches (mustard gas as a tool in crime-solving for example) and the plot works rather nicely. There are suspects  in abundance - just about everybody associated with the Château Suvlac has something to hide. There is no shortage of odd and interesting characters.

It’s all highly enjoyable and is most definitely recommended.
Posted by dfordoom at 4:17 AM