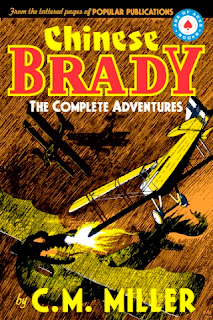 Chinese Brady: The Complete Adventures is a collection of all the Chinese Brady stories by C. M. Miller that were published during the 1930s in the pulp magazines Battle Birds and Dare-Devil Aces.

Chinese Brady’s adventurous life had begun in China during the Boxer Rebellion and included stints as a general in the Mexican army, a buck private in Guatamela, a prime minister of Abyssinia and a general in China. Now he’s a captain and fighter pilot in the US Army in the First World War, flying SPADs.

He’s technically too old to qualify as a pilot, but that’s a minor detail that is certainly not going to stop Chinese Brady. He has dyed his greying hair black and enlisted originally under a phony name but pretty soon his real identity has become well-known. His commanding officers, Lieutenant-Colonel Bill Wharton and Major Roger Abel, are old comrades-in-arms from his China days.

Brady takes command of a squadron of young, eager but very inexperienced pilots. He spends as much time trying to keep them out of trouble as he does fighting the enemy.

The first few stories are fairly conventional air combat stories but during the course of the 30s they would become stranger and stranger. The Germans come up with a succession of secret weapons, any one of which might win the war for them. But not if Chinese Brady has anything to do with it. He will battle flying dragons, tanks that appear from nowhere, warriors in medieval armour, New Guinea tribesmen, invisible pilots and the dreaded Musical Death.

Brady is a typical pulp two-fisted action hero. He’s one of the most dangerous American air aces but many of these tales see him operating behind enemy lines. He uses his brains as much as brawn, and his fists as much as the twin Vickers machine-guns of his SPAD.

As the stories took on more and more of a science fictional tinge they also became more and more interesting. This is pure pulp fiction, and it’s none the worse for that. Miller’s writing might not be polished but it’s energetic and it’s entertaining. And it gets straight into the action.

There was a whole genre of these air combat tales with science fictional and fantastical overtones. Donald Keyhoe's stories of Captain Philip Strange, the Brain-Devil, collected in Strange War, are some of the best but Miller's stories are just as good in their own way.

The Chinese Brady stories certainly stretch credibility but once you accept that they’re a crossover between aviation adventure and science fiction there’s plenty of enjoyment to be had.

Highly recommended for pulp fiction fans.
Posted by dfordoom at 3:47 AM