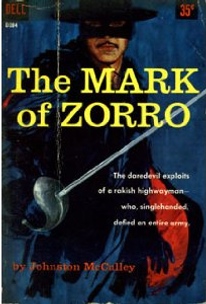 Johnston McCulley’s The Curse of Capistrano, serialised in the pulp magazine All Story Weekly in 1919, marked the first appearance in print of Zorro. The character was destined to become one of the iconic adventure heroes of course, but while the novel was quite successful what really got the ball rolling was the 1920 movie adaptation.

The movie changed the title to The Mark of Zorro and was a huge hit, propelling Douglas Fairbanks to superstardom. It was so successful that the original novel was published in book form under this new title in 1924.

The setting is California in the early 19th century when it was still a possession of the Spanish crown (it became part of Mexico in 1822 and then part of the United States in 1848). The setting of the novel is not strictly accurate historically but it does succeed rather well in conveying at least part of the particular flavour of Spanish California. The ruling class, the caballeros, are obsessed by lineage and honour. To have the right blood is everything. And their concept of honour hearkens back to the chivalry of the early Middle Ages. These are very proud people and they are very sensitive to even the smallest points of honour.

This is something of a problem for Don Diego Vega. He certainly has the blood. No-one in the pueblo of Los Angeles can boast a more exalted bloodline than Don Diego. But while most caballeros are excessively eager to resort to their swords to defend their honour Don Diego is a languid and rather effete young man who prefers to read poetry. Respect for blood is so ingrained that no-one would dare accuse him to his face of being lacking in manliness, and the Vega family is also immensely powerful and politically influential. No-one dislikes Don Diego but privately there is some concern about his lack of physical prowess and his abhorrence of violence.

The famous outlaw Zorro has become a legend not just because of his skill with the sword but also for his concern for justice. The governor is corrupt, taxes are crippling, and many honourable families have seen their wealth ruthlessly stripped from then by the governor and his voracious minions. The one man who is prepared to take a stand against this injustice is Zorro. Zorro is not just a friend to oppressed and financially ruined caballeros however. He also steps in to defend the Franciscan friars who are being victimised and fleeced by the corrupt government. He is equally ready to defend the Indians whenever and wherever they are mistreated. Zorro is in essence Robin Hood in a different setting.

Don Diego’s father is rather displeased by his son’s apparent lack of spirit, and even more displeased that Don Diego has yet to marry and produce an heir. This is of course a vital necessity for any aristocratic family and Don Diego is his father’s only child. Under pressure from his father he is rather listlessly wooing the beautiful young Lolita Pulido. Her family has blood almost equal to that of the Vega family but her father Don Carlos has fallen out of favour with the political leadership and has lost most of his land and most of his wealth. Don Carlos is desperately anxious for a marriage alliance with the Vegas. Unfortunately Lolita is not impressed by Don Diego. She wants a real man. She also wants a lover who is romantic and passionate, and Don Diego seems uninterested in either romance or passion.

When Lolita encounters Zorro it is a different story. This is a man whom she could love. And Zorro is obviously interested.

While Don Diego is listlessly wooing Lolita a rival has appeared on the scene in the form of Captain Ramon. Ramon’s courtship is more than insistent - he goes so far as to threaten her honour. This is something that Zorro will not tolerate. And while all this happening the Pulido family is facing not just complete ruin but the accusation of treason. Zorro has to find a way to save both Lolita’s honour and her family. He will also have to protect his old friend, the friar Felipe. Felipe may be a man of God but he’s a pretty tough hombre who is afraid of no-one and who stands up for the rights of the oppressed.

Don Diego has formed an unlikely friendship with the boastful and violent Sergeant Gonzales. Gonzales is flattered to have a friend of such high rank, and the friendship is useful to Don Diego. Being a man of peace and something of a wimp it’s handy to have a friend who is both a tough guy and an important member of the local troop of soldiers.

The true identity of Zorro is not revealed until the end of the book but anyone who has ever seen any Zorro movie, comic book or TV episode already knows who he is and it really is blindingly obvious. In fact I suspect that McCulley expected his readers to figure it out pretty quickly - what’s important is that none of the other characters know his identity. Knowing who Zorro really is doesn’t affect the reader’s enjoyment of the book in the slightest and possibly even enhances it. By the time The Mark of Zorro appeared in book form in 1924 the secret would have been known to everyone who had seen the enormously popular 1920 movie. But on the off-chance that you’re not aware of Zorro’s identity and you don’t want to know until you read the novel, you might want to skip the next two paragraphs.

What the people of the pueblo of Los Angeles don’t know of course is that Don Diego is anything but a wimp. He is in fact the notorious outlaw hero Zorro.

Don Diego’s effeteness provides him with the perfect cover for his alter ego. No-one knows Zorro’s real identity but the last person anyone would suspect of being the renowned outlaw is Don Diego Vega. This cover has yet another advantage - it allows Zorro to keep tabs on the local troops. Don Diego has strengthened this advantage by befriending. Don Diego/Zorro always knows exactly what the troops are up to.

This is pure pulp fiction, with action aplenty. The plot races along in fine melodramatic style. McCulley’s style is pulpy but his characters are colourful and he knows how to spin an exciting tale of adventure and romance.

This version of Zorro is as heroic and honourable as his various movie and television incarnations but rather more ruthless. The violence is also somewhat more graphic.

The unusual and exotic setting is a major plus and is utilised quite effectively. McCulley has been criticised for not adhering more closely to the historical background but this is pulp fiction and it’s the flavour that is important, not strict historical accuracy.

Thoroughly enjoyable story-telling, and definitely worth a read.
Posted by dfordoom at 5:04 AM