Richard Marsh's The Goddess: A Demon 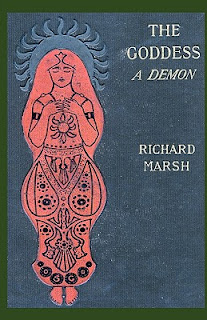 Richard Marsh (1857-1915) is best remembered today for his bizarre gothic novel The Beetle, which was published in the same year as Dracula and at the time outsold Stoker’s classic novel.

Marsh’s real name was Richard Heldmann. His father was a German lace merchant who became a naturalised British subject. He was declared bankrupt in circumstances that suggested that in his business affairs he sailed rather close to the wind and may have been involved in practices that were on the edge of illegality. His son seems to have inherited his father’s recklessness. Richard Heldmann’s literary career was interrupted by a prison sentence for forgery in the 1880s.

By the early 1890s he had resumed his writing career and was starting to make a name for himself as a popular writer of sensationalistic but entertaining novels. He went through an amazingly prolific period in the late 1890s and early 1900s. In one year no less than eight books of his were published, although this total included re-issues of earlier works. He was regarded with disdain by serious critics but this had no effect on his popularity.

Apart from The Beetle his most notable foray into the world of gothic fiction was The Goddess: A Demon, published in 1900. This novel combines elements of Wilkie Collins-style sensation fiction, crime fiction and the gothic. And like The Beetle it has a rather bizarre flavour all its own. No-one else wrote fiction quite like Marsh’s. He avoided the obvious themes and had a strange but fertile imagination.

The Goddess: A Demon opens with a bizarre murder. The victim, Edwin Lawrence,  appears to have been slashed to death in a frenzied attack by several different knives. A short while earlier he had been playing cards with the book’s narrator, John Ferguson. Ferguson was fairly sure that Lawrence had been cheating, and Ferguson ended the night owing Lawrence no less than £1,880.

Shortly afterwards a woman enters Ferguson’s apartments through an open window. She is covered in blood and seems confused. In fact more than confused - she doesn’t even know her own name. She witnessed the murder but has no idea who the murderer was. It may have been her. She simply doesn’t know.

Ferguson is a tough adventurer who has been around but when it comes to women he is something of an innocent. He us convinced the woman is innocent. Persuading the police of her innocence is however no easy task, complicated by the fact that he himself is also a suspect.

Marsh has quite a few plots twists still up his sleeve at this stage, and they are genuinely unexpected.

The atmosphere is one of paranoia and madness. Ferguson isn’t even entirely sure of his own innocence, and the sanity of most of the characters is in some doubt.

In its own way this book is just as interesting and just as strange as The Beetle. It’s a difficult novel to classify - weird fiction is perhaps the closest one could come to assigning it to a particular genre. It’s very weird indeed, in a way that only Richard Marsh could successfully pull off. Definitely highly recommended.

The Valancourt edition includes an introduction and about eighty pages’ worth of assorted appendices on everything from Victorian concepts of madness to London fogs to knife crime. The introduction alone makes this edition the one to look for.
Posted by dfordoom at 2:20 AM