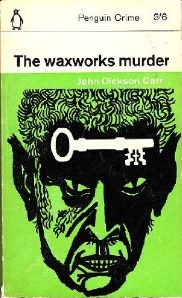 Carr was the acknowledged master of the “locked room” mystery and its near cousin the “impossible murder” mystery. The Waxworks Murder fits more into the latter category although it certainly deals with doors, keys and passage-ways.

Carr (1906-1977) was an American who lived in England for many years, a fact which gives many of his crime novels a feel that is more English than American.

A woman’s body is found in the Musée Augustin, a wax museum in Paris. She is found in the arms of a waxwork monster. The wax museum is not however the main focus of the story. The primary focus is on the Club of the Silver Key next door, although there is an entrance to the club through the wax museum, a point which will become of major importance.

The Club of the Silver Key is a place of assignation. It is, if you like, a high-class sex club for the bored and the wealthy. Several young women have been enticed to this club, some more willingly than others.

There’s the usual assortment of suspects, and there are the plot twists and red herrings you associate with golden age detective novels. There are doors that can only be opened from one side, and the keys associated with the club are important not just as keys but as badges of membership. To add some spice, and to further complicate Bencolin’s task, the members of the Club of the Silver Key are always masked when they attend meetings.

It’s a skillful mixture of clever plotting with high-class sleaze and debauchery. And a very entertaining mixture it is. Recommended.
Posted by dfordoom at 10:21 PM