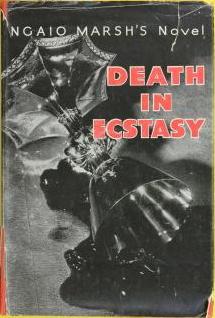 Death in Ecstasy was the fourth of Ngaio Marsh’s Detective Chief Inspector Roderick Alleyn mysteries, appearing in 1936. The story is set against a background of a rather dubious religious cult.

Journalist Nigel Bathgate is bored, bored and curious. That’s what drives him to the House of the Sacred Flame. This religious cult combines a bit of everything, from Christianity to Norse paganism to eastern mysticism. It attracts the bored and the wealthy, the cynical opportunists and the gullible.

It attracted Cara Quayne, who mysteriously drops dead during one of their ceremonies. Nigel Bathgate knows enough about crime to immediately suspect poison, and he makes a quick phone call to his old friend Detective Chief Inspector Roderick Alleyn of Scotland Yard. Even with the overwhelming odour of incense pervading the temple the characteristic bitter almonds smell of cyanide is hard to miss. And no other poison could have killed its victim so quickly.

Alleyn is not exactly thrilled to find himself saddled with such a case. His distaste for cults is strong and instinctive. Nonetheless he is on the spot within minutes - at least he has the advantage of being called in when the trail is well and truly warm.

The House of the Sacred Flame cult is run by the Reverend Jasper Garnette, and it’s a nice little earner. Several wealthy people have put large sums of money into the cult, including both the deceased and American businessman Samuel J. Ogden. A Frenchman named Raoul de Ravigne, who was once wealthy but suffered considerably from the stock market, also invested a lesser but still not inconsiderable sum.

There are seven Initiates in the cult. Apart from the deceased, de Ravigne and Ogden there are also a Mrs Candour, a Miss Wade, a nervous young woman named Maurice Pringle and his fiancée, Janey Jenkins. They all took part in the fatal ceremony, and are therefore all suspects. As is the officiating priest, the aforementioned Reverend Jasper Garnette, and his Acolytes, two rather fey young men named Claude and Lionel, and a medical practitioner, Doctor Kasbek, who was on the scene within seconds of Cara Quayne’s death. Miss Quayne’s old nurse, who was bitterly opposed to Cara’s membership of this cult, is yet another suspect as she was present as well although her presence was unknown to any of the participants.

So there is an embarrassment of suspects. There is also an embarrassment of motives. This is because the cult was in fact a seething cauldron of repressed sexuality, jealousy and greed. And Alleyn doesn’t take long to notice that Maurice Pringle displays all the symptoms of narcotics abuse. He is a heroin addict, and he is not the only member of the cult who indulges in this vice. No wonder Roderick Alleyn finds this case distasteful.

Ngaio Marsh’s plotting is as skillful as you’d expect from a woman who was one of the big guns in golden age detective fiction. Her style is often tongue-in-cheek and includes the sort of self-referential touches that annoy some readers - halfway through the book one character makes the observation that if this was a detective novel it would be roughly at the halfway point. If you can ignore this sort of thing then her witty style has much to recommend it.

Roderick Alleyn would be in the well-established tradition of gentlemen detectives but for one thing - he is a working policeman rather than an amateur of crime.

Death in Ecstasy is highly entertaining and the cult background adds a good deal of fun. Recommended.
Posted by dfordoom at 1:22 AM