The Black Corsair, by Emilio Salgari 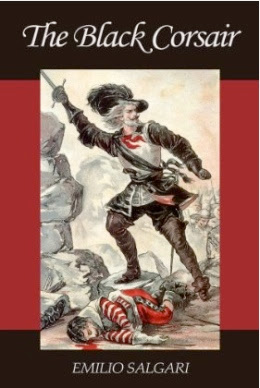 Emilio Salgari was one of the great masters of swashbuckling adventure fiction. Among his most successful books were those dealing with the pirate known as the Black Corsair, starting with The Black Corsair in 1898.

The life of Emilio Salgari (1862-1911) was as packed with adventure as his novels. Or at least that’s what he liked to claim. In fact his biography was as much a fiction as his novels. He is however enjoy immense success and he remains one of the giants of Italian popular fiction. His admirers have included intellectuals such as Umberto Eco. Federico Fellini was a huge fan.

The hero of The Black Corsair is one of four brothers. They had been soldiers but had been betrayed by their commanding officer. The eldest brother met his death as a result. This officer is now the governor of the Spanish colony in Maracaibo, in Venezuela. The three survivors took to piracy and vowed vengeance, but the Red Corsair and the Green Corsair were captured and hanged by this same man. Now only the Black Corsair is left, but he is the most formidable of them all.

The Black Corsair is just one of many pirates based in Tortuga, in Hispaniola, in the late 17th century. The enormous wealth of Spanish America provides them with rich pickings. When the Black Corsair proposes a large-scale raid on Maracaibo a formidable fleet is soon assembled. The Black Corsair is not interested in loot - his is motivated purely by his thirst for revenge. He made a terribly vow after the death of his brothers, a vow that will come back to haunt him.

What follows is non-stop action on land and sea. Salgari doesn’t let the pace falter for an instant. The Black Corsair himself is a forbidding figure, a man consumed by hatred.

It’s pretty much a must-read if you’re a fan of swashbuckling adventure in general or pirates in particular. Although not all that well-known in the English-speaking world Salgari had an enormous influence on this genre and on pop culture in general (Sergio Leone for example claimed him as a major source for the heroes of his spaghetti westerns).
Posted by dfordoom at 7:46 AM