Skull-Face and others, by Robert E Howard 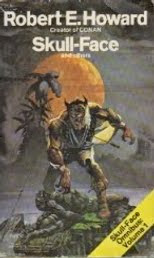 While Robert E. Howard is best known for his sword and sorcery stories of Conan, Solomon Kane and Bran Mak Morn he also wrote horror and dark fantasy with contemporary settings. Skull-Face and others collects a number of these stories.

The title story is a kind of Sax Rohmer pastiche with a considerable seasoning of Lovecraftian elements – survivals of mysterious and unimaginably ancient and inhuman elder civilisations. The Lovecraftian stuff is quite well done. The Black Stone deals with ancient cults, and is a bit like Lovecraft with a generous helping of S&M fantasies on the side, but still quite a good story. Wolfshead is a highly interesting and original werewolf story.

The Horror from the Mound is especially interesting, being a purely American vampire tale with none of the usual European elements. The Cairn on the Headland deals with dead pagan gods who are really not quite so dead after all, and mixes this with a modern scholar discovering his past life, a life that determines his destiny in our age.

Overall an odd but fascinating collection, not quite top-flight Robert E. Howard but still entertaining.

Email ThisBlogThis!Share to TwitterShare to FacebookShare to Pinterest
Labels: H, sword and sorcery