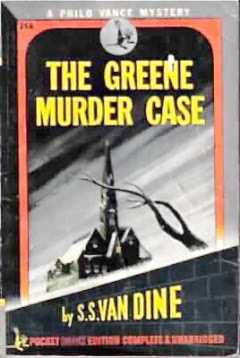 The Greene Murder Case, published in 1928, was the third of S. S. Van Dine’s Philo Vance novels. Of course whether you actually enjoy the Philo Vance books is very much a matter of taste.

Most of the criticisms that have been made of these books are entirely accurate. It’s just that if, like me, you’re a fan then you’ll see those things as virtues rather than faults. Vance’s aristocratic mannerisms, his affected mode of speech, his prodigious knowledge of any subject you care to mention, the scholarly footnotes, these are all these things you will either find irritating or endearing. Vance is pretty much an American version of Lord Peter Wimsey, but with even more esoteric learning than Wimsey.

There’s also the matter of Van Dine’s plotting, even by the standards of golden age detective fiction his plots are outrageously convoluted and incredibly unlikely. But then golden age detective fiction really is an artificial kind of creation. No real-life criminal would ever come up with plans as fiendishly complex as those we take for granted in the crime novels of the 20s and 30s. That’s part of the fun. It’s all an elaborate and highly civilised parlour game.

In this case we have a wealthy New York family, the Greenes, who find themselves being slowly and systematically wiped out. Well actually they’re being wiped out rather quickly. And as for suspects, almost everyone who has ever come into contact with this unpleasant family could qualify. And if it’s an inside job then just about any member of the family could easily be imagined as taking great joy in exterminating the others.

Naturally there’s a will involved, and naturally it’s an odd will. Wills containing eccentric provisions are one of the great conventions of golden age detective stories. In this instance the late Tobias Greene’s will provides generously for his descendants but makes them virtual prisoners in the family mansion. And even more disastrously it forces then all to live under the same roof where their hatreds and resentments soon blossom in spectacular fashion.

Fictional detectives often regard the police and other law enforcement officials with disdain but Philo Vance is something of an exception. He works closely with his friend Markham who happens to be the District Attorney, and he gets on well with the competent and determined Sergeant Heath of the Homicide Squad. This case requires the talents of all three as a web of dark family secrets is slowly revealed, and as the mysterious killer goes on claiming new victims. They need to solve the case before the Greene family becomes extinct in its entirety, although Vance is inclined to think this would be no great loss to humanity.

I like Vance as a character and I don’t mind plots of byzantine complexity and I thoroughly enjoyed The Greene Murder Case.
Posted by dfordoom at 2:39 AM